Doctor Who - The Romance of Crime Review 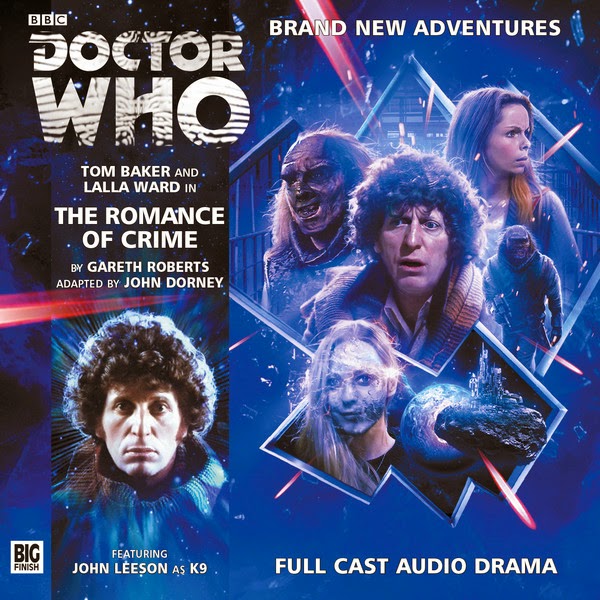 The Doctor, Romana and K – 9 have gotten themselves mixed up in a big crime dispute while on The Rock of Judgement.   The Rock is the prison and execution area for the Uva Beta system.  This system is very dangerous as The Doctor has to deal with a maverick law man, a mob group who use the Ogrons as servants and then there is the thing about a possessed mask which melds to your face and takes you completely over.   What is the mystery of the mask and why is it so powerful?   Can The Doctor and Romana save the day again or will they be killed by a psychotic woman wearing a mask.

I have to say I am not a fan of Season 17 of Doctor Who.  Season 17 is Tom Baker’s 6th season as The Doctor and it was a time that Tom Baker did not listen to the director, producer and thought he knew better than the script writer.  It was also a time when you had a producer with no backbone who more or less let Tom Baker get away with it for the most part.  In fact this started during the Key to Time season 16 and there were hints of it towards the end of season 15 when the Robert Holmes commissioned stories finished and the Anthony Root ones started.  With that said The Romance of Crime fits in this era and after listening to it I just did not enjoy it all that much.

First of all most of the actors were way over the top especially Michael Troughton as Menlove Stokes.  It was just horrible.  The script was trying to get Tom Baker to act as he did back in the late 70’s but unfortunately he is in his 80’s now and it just did not have the same effect.  It just sounded out of place to me.  Even Miranda Raison was off in this one and that is quite sad as I like her as an actress and I am looking forward to hearing her as the new 6th Doctor companion this year.  Lalla Ward was pretty good as Romana and it was good to hear her in the role again and that was the best performance in the audio.  I’m glad Lalla Ward is back in the fold and it will be good to hear her in the 4th Doctor audio range next year.

The Romance of Crime is an audio adaption of the Virgin Missing Adventure novel by Gareth Roberts.  I never did like Gareth Roberts Missing Adventures books all that much as I enjoyed his New Adventures novels better.  In all honesty I loved his novelization of Shada which does fit in with the era I do not like.  But remembering back I did not like the book that much but in fairness I liked the book better than the audio.

This story felt to jumbled with lots of stuff going on that it got hard to follow at times.  Hard to differentiate which character was doing what and that aspect made me lose interest in the story.  It’s too bad as the concept of the story was interesting from the description on the back of the CD but the execution just did not pan out.

This story brought back the Ogrons.  The Ogrons were a 3rd Doctor enemy that were servants of the Daleks during the beginning of the Pertwee era and did work with The Master in their last appearance in Frontier in Space.  I always thought it would be good to have them come back in NuWho and have them be the Daleks servants again.  But hearing how bad they were in this story and then realizing that Moffat would probably have them in something worse I figured they can wait for a return until there is a new show runner.  I was disappointed that Big Finish didn’t utilize them better and make their voice more threatening instead of making them stupider than they were on the show.

Have to say I was disappointed with The Romance of Crime and I’m not disappointed much by the audios from Big Finish.  They had a chance to make an audio adventure for the 4th Doctor to be less comical and over the top and make it a bit different than the stories from Season 17.  But they didn’t and that is unfortunate because I still have to listen to The Well-Mannered War and I hope it isn’t a repeat of The Romance of Crime.
Grade D+