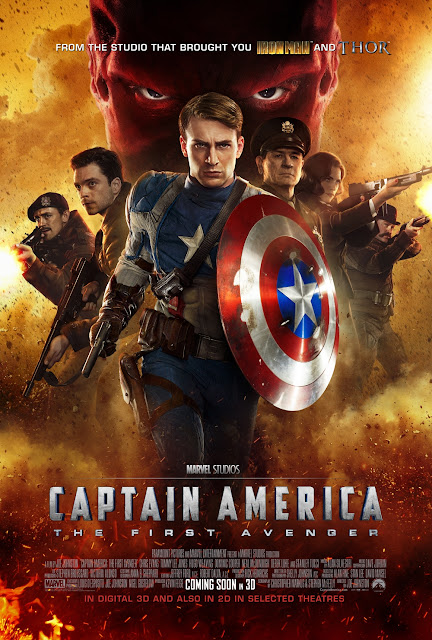 One of the highly anticipated movies of the summer is finally here and does it live up to the hype and does it continue the winning streak that Marvel Comics Studios has been having by releasing cool comic book movies.   This movie is the spring board to the Avengers movie but first there is the cool 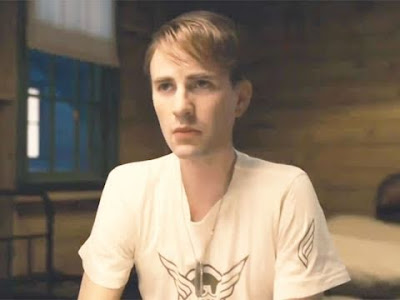 origin of Captain America to get through first.  The neat part is how they are able to make Chris Evans look like a weakling.  I don't know how they did that.   But it did look realistic.  I do have to say that the makers of this film did do their homework.  I thought the whole origin for the most part was spot on.   I did like how they incorporated the Marvel movie continuity into the film by involving Howard Stark in the creation of Captain America.  I did like using a machine to pump Steve Rogers with the super solider serum.  Cause in the comics the just take one needle and inject him with it.  This new way was a whole lot better and did add a more of a comic book/sci-fi feel to the movie.  That might be one of the reasons that I liked this movie so much.  It felt like a comic book movie and not a super hero movie.  In the comic books it is understand that Captain America gets all these cool gadgets and placed in hard to imagine scenarios that don't need explaining.  You just expect Captain America to save the day and beat up the bad guys no matter how unrealistic it may seem.  That's the feel and charm of this movie.  You don't need any explanation you just except what happens and you want to see how the hero deals with it. 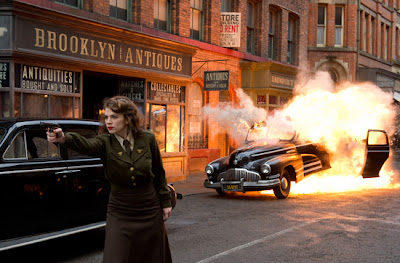 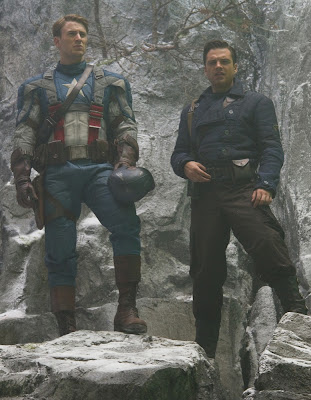 Captain America was very entertaining.  Once the action started it never stopped with lots of gun fights, explosions, and fist fights to make any comic book fan happy.   After you get past the origin and very well done build up of the character of Steve Rodgers with some funny moments thrown you get the full blown Captain America.  It was neat to see Captain America in his first mission with his original shield.  It was awesome.  I loved how he broke into the Hydra base and rescued what would end up being the Howling Commandos.   I loved how they reunited Captain America with Bucky.  It was pretty cool to see the two icons of the 40's standing side by side and then seeing the two confront the Red Skull for the first time.  That sequence of events was handled very well and a great moment for any Captain America fan.  I definitely had chills up my spine when during Cap's first mission.  It was fantastic.  It gets better from there.  Once he gets his real costume and the shield that everyone identifies Captain America with the film takes it up a notch with action gallour.  The action sequences on the train was really cool as you get to see Cap use his shield like he does in the comic book.  It is also the scene where you get to know more about whats inside the man as he has to deal with the death of Bucky.  Although this is not how it happens in the comic book but for the sake of the movie continuity it works out pretty good. 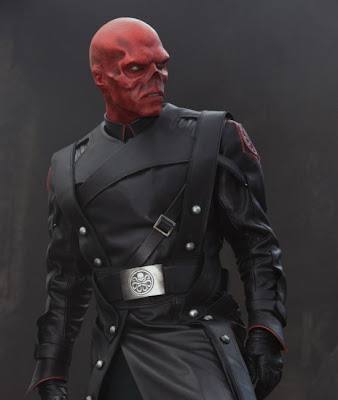 I loved Hugo Weaving as the Red Skull.  It couldn't get any more realistic than this performance.  Hugo Weaving captured the true maniac and psychotic nature of the Red Skull.  It was almost as if the Red Skull had actually stepped out of the comic book and right into the movie.  Of all the Marvel Comic movies they finally got the bad guy right for a change.  In Thor Loki was kind of OK but didn't really seem convincing.  The Spiderman villains were close but they just didn't really hit the mark with maybe Doctor Octopus coming close.  The Hulk forget it and don't get me started with Doctor Doom and Galactus from the Fantastic Four(reboot FF please.) but the Red Skull was magnificent.   One of the best scenes was when the Red Skull took off his rubber mask to reveal the skull face.  That was cool indeed.   I also liked the fact that he had the cosmic cube.  It makes sense that the Red Skull had it as it makes that after credit scene in Thor make more sense.  Plus in the comic he had it first and then it got unleashed on the Marvel Universe.  So the makers of these movie are definitely doing their homework and appeasing the hardcore fans and making an enjoyable movie for common fan. 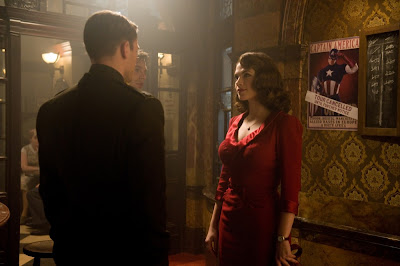 When Chris Evans was chosen to play Captain America I wasn't sure they made a good choice but I bit my tongue and wait to see the movie to form an opinion.  I'm glad I did because I would have had egg on my face if I said anything negative about him.  Chris Evans was excellent as Captain America and now I can't see anyone but him playing that character.  He brought Captain America to life and you actually believed that Captain America was real.  Well maybe not that far but Chris Evans brought the character to life and you could almost believe that he could do anything.  He brought the nobility and patriotism and courage and emotions that have been the Captain Americas traits in the comic book.  I also liked the chemistry between Cap and Peggy Carter.  The pairing of Chris Evans and Hayley Atwell worked pretty well.  You could see the affection that the two characters had through out the film. There were some pretty good scenes with Steve Rogers and Peggy Carter. You could say that the advice and importance to Steve Rogers life was responsible for shaping Captain America to what he is today. Some of the best scenes involved these two characters. This doomed romance was done just like the comic book and I was curious when they got to present day if we were going to see Sharon Carter the niece of Peggy.  But we didn't.  It was good to see Peggy Carter do more in this movie than being a pretty face.  We see that she joins the boys in fighting Hydra and at one point saves Captain Americas life.  Tommy Lee Jones character Colonel Phillips stole the show with his dry humor and great one liners.  He was a great source of comic relief in what was mainly a serious movie. 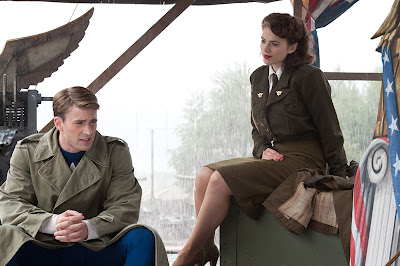 Needless to say I really enjoyed Captain America and so far this is the best comic book movie of this year.  I would even go so far and say it is the best one since Iron Man and The Dark Knight. so if you are a fan of Captain America your movie has arrived.  So go see it and revel in all the comic book goodness.  Plus keep your eyes open for a certain Invader that makes a quick cameo.  If you are just a casual fan and are on the fence about seeing this film then I fully endorse seeing this film as it was fun  and very entertaining.  You do not need to know anything about the history about Captain America to enjoy this film.  It is a great comic book movie that is worth 2 hours of your day.  Plus stay till the end of the credits for an extra scene and trailer.