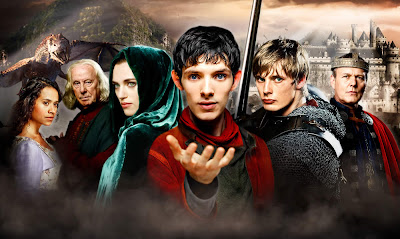 At the Merlin panel at SDCC it was revealed that Merlin has been renewed for a 5th series.  This is good news indeed since the 4th series has not aired yet.  The creators made the announcement

Capps suggested that the commission will allow the show's writing team more "creative space" and promised that future episodes will feature a greater focus on "slow-burn" character arcs.

The fourth series of Merlin is currently filming in Wales and France. Nathaniel Parker will join the regular cast as Agravaine, the uncle of Arthur (Bradley James), while Whitechapel's Phil Davis and former Spooks star Gemma Jones have also signed up for guest roles.
Johnny Capps previously revealed that that the fourth series will open with a two-part adventure telling "the story of Morgana's revenge".

"We left Morgana (Katie McGrath) in a terrible state at the end of the last series," he said. "She does quite an extreme thing [in series four], and it's the question of whether Arthur and Merlin (Colin Morgan) and the knights will be able to defeat her."

You can read the whole Merlin panel recap at this link.

Email ThisBlogThis!Share to TwitterShare to FacebookShare to Pinterest
Labels: Merlin