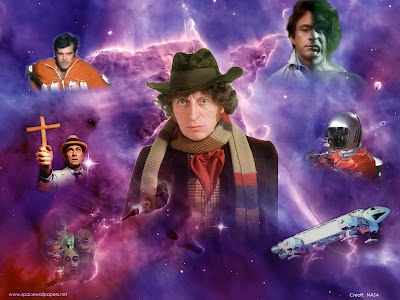 My favorite shows on the 70’s include three of my all time favorites and also incorporate some shows that have sentimental meaning to me as I grew up with them..

As with previous articles of the 2000’s, 90’s and 80’s, the majority but not all of the shows on this list I watched when they first aired. Most of these that I did watch, I have seen since so it is not necessarily just the sentimental memories driving their rankings.
I just want to mention that for the most part I left animation series including anime off the list. In the case of Starblazers, which began in the 70’s, I have elected not to include it because I never watched the third season with its limited release. As with all my shows, I have to have watched a vast majority of the episodes if not all of them and so this does not qualify. If I had it would have been in the top 5.
Just for the record, mini series, such as Hitchhiker’s Guide to the Galaxy would be on my list for the 80's but because it is a mini series, I have not included it. Moonbase 3 on this list only lasted 6 episodes but it wasn't meant to go just that long therefore I include it even though it should be lower on the list. I had also moved Blake’s 7 from this list to the 80’s mostly because my 80’s list is much weaker. 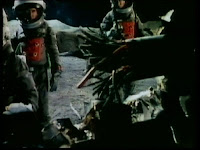 10 – Moonbase 3 (1973) – This British show was produced as sort of an alternate to Doctor Who, bringing more down to Earth stories and realism. This is one of the only two on this list that I saw years later and in this case, watched it for the first time only a few years ago. While I do remember enjoying shows like Ark II and Space Academy, I find myself ranking Moonbase 3 a bit higher because it didn’t have a remote control robot toy or a talking monkey as main characters. 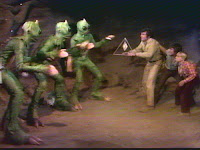 9 – Land of the Lost( 1974-1977) – Mostly driven by nostalgia, this show had some really good things in it. First off it was and still is scary. The Sleestak are one of the scariest creatures on the small screen. The effects and concepts are also excellent with only acting and some of the child like dialog bringing the show down. Recent viewings don’t hold up with juvenile stories and lessons to be learned that seemed as if the audience was being talked down to. But on the other hand the high concepts, at the same time, created thought provoking memories of alternate realities and time travel. 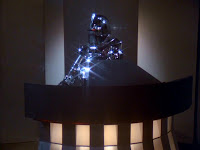 8 – Battlestar Galactica (1978-1979) – Okay, I watched this when it was out and enjoyed it for the most part. Over the years I have grown detached from this show and comparing it to the later Galactica, the original seems dated and campy. Still, there was enough for me to watch when it was on.

7 – Bionic Woman (1976-1978) – This spin-off of The Six Million Dollar Man at times had better stories. The acting was at least superior with Lindsey Wagner in the role. Still, it was copy and so doesn’t go up higher on my list.


6- Kolchak the Night Stalker( 1974-1975) – Speaking of scary, this show was that. Today it may not seem as bad but at the time people were puking scared at this series. The show set the stage for The X-Files and others.

5 – The Incredible Hulk (1977-1982) – This was one of the better formats for a series during this time period. The traveling David Banner encounters the usual troubles of shifty businesses, mean old thugs and other corrupt people trying to keep the innocent working class down. In comes the good hearted Banner who ends up taking care of the situation by turning into the Hulk and beating up all the bad guys. The formula does get repetitive and very easy to predict. David Banner walks into a bar and there are some rowdies in the corner – oh, I can see this coming a mile away!!

4 – The Six Million Dollar Man (1973-1978) – This was my definitive 70’s TV show. I watched this with a passion and was able to view some episodes in later years seeing that the show holds up fairly well. This show had lots of fun and action but even my memory remembers some level of silliness in the later seasons. Again, scary comes into play with Big Foot. At least he was scary back then, not as much these days. 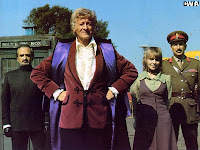 3. Doctor Who (1970-1979) – For the most part I watched very little Doctor Who in the 70’s. Most of this decade I watched a few years later. For many, the 70’s was the pinnacle of Doctor Who. It had most of Tom Baker and some of the best stories of the entire series. It certainly deserves this high ranking. With stories such as “Terror of the Autons”, “The Daemons”, “The Sea Devils”, “Genesis of the Daleks”, “Pyramids of Mars”, “The Robots of Death”, and “Talons of Weng-Chiang” one can easily see this was one of the best times for Doctor Who. 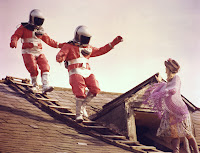 2 – UFO (1970 – 1971)) – My skewing of these ranking will continue into the 60’s with Gerry Anderson productions reaching high in the rankings. UFO was a very early series for me and I remember not understanding much of it and being terrified by the music, Siamese cats and that green liquid filling up alien helmets frightened me to no end. Multiple viewings only made me love this series more and looking past the styles, the show is very progressive for its time.

1 – Space: 1999 (1975-1977) – This was the show for me. Everything about it I liked and years later I grew to enjoy it with each viewing. The first season has an epic quality with incredible effects and high concept ideas. The second season became more pedestrian with rubber monsters and comedy. This does not deter me in enjoying this show more than any other.
Some very heavy hitters in the 70's with quite a few that I really enjoy not on the list. The 70's include the majority of what I grew up with although I did watch many 60's shows, some of which you will see in the next part.
Posted by SHADOKP at 9:05 PM