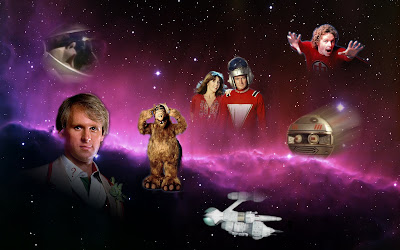 My top ten Sci-Fi and Fantasy shows of the 80's includes a mixture of shows, most of which I find slightly embarrassed to say I was a fan of. Still, there are some excellent entries in this decade including a fair number from the UK.
The 80's was a very busy decade for me concerning television watching. But for the most part it was all about catching up with fabulous TV of the 60's and 70's mostly coming from the UK. My interest in Gerry Anderson, Doctor Who and Blake's 7 dominated the decade while many shows on TV I completely ignored. Still, I was able to find 10 shows to put in the top ten, barely. As with most of my lists, 1 or 2 I watched years later. I included Doctor Who again (it was also in my 2000's list) and will rate the show based on the episodes from that time period. All these shows had the majority of their episodes in this decade.
As one can see from the first photo, the 80's is a decade of farce and comedy with four or five falling into that realm. 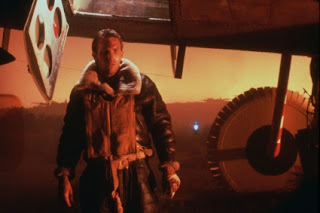 10- Amazing Stories (1985-1987) – More bottom feeding here but actually this show had some good things in it. It was a anthology series and like Twilight Zone of the past, tried to deliver fantasy driven plots each week and succeeding from time to time. The stand out episode “The Mission” features a very tense World War II tale of a B-17 forced to make a landing without landing gear. The landing would unfortunately kill the belly gunner who is trapped inside in the turret. 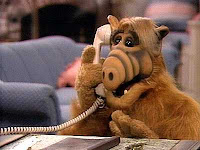 9 -Alf (1986-1990) – For the most part this is just another sit com but with a sci-fi twist. The lovable alien, Alf was as popular as milk for a while. I remember even having a stuffed Alf until I sold him on e-bay for more than I paid. Like Max Headroom (higher on this list) the character of Alf became a celebrity with his own talk show and made appearances on many other shows like Hollywood Squares and Blossom. 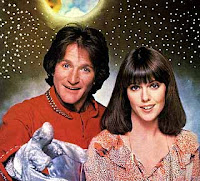 8- Mork & Mindy (1978-1982) – Another comedy here and this one was very popular as well. Robin Williams had arrived in the entertainment world and this show had numerous things going for it. It sort of took on some shark jumping in later seasons but I remember this as being one of the funniest shows. 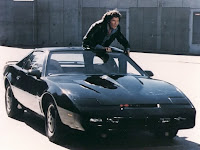 7- Knight Rider (1982-1986) – speaking of comedy, this may be one of a few shows on my lists in upcoming weeks that includes a series that is sort of laughed at now. With Hasselhoff leading the way, this show was fun but I can't imagine ever watching it again. 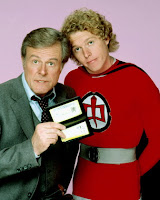 6- Greatest American Hero (1981-1983) – More comedy and some good stuff with this one. The chemistry of the main cast and the always funny out of control flying scenes made this show. Perhaps we had lower standards in the 80's just look at the hair styles and clothes. 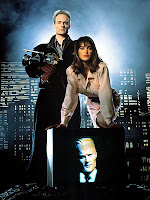 5 -Max Headroom (1987-1988) – Comedy with brains, this series perhaps had a bit of intelligence behind it. The bleak world of the future was really captured well in the pilot and series that spawned from it. There was a more serious series behind the wise cracking Max Headroom but it was probably the best made American sci-fi series of the 80's. 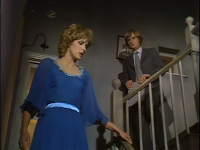 4 -Sapphire & Steel (1979-1982) – I watched this a few years ago and part of me enjoyed the strangness and originality of the idea while part of me couldn't understand any of it. The series seems to thrive on technobabble to the extreme but has some really good ideas. The chemistry may be considered excellent but I found the main cast's lack of emotion very dry and welcomed other of their kind like Silver and Lead from time to time to break up the monotony. It would have been great to see more of their origins and other elements. 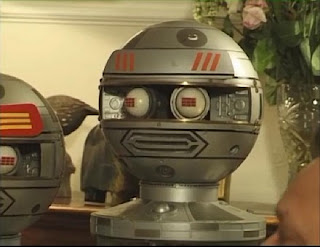 3- Terrahawks (1983-1986) – Someone recently mentioned this show in discussing bad TV but I would have to disagree. Gerry Anderson created this show with inferior puppets and effects compared to his Supermarionation shows of the 60's. The level of scripts lowers a bit and is for younger audience than the family shows like Thunderbirds and Stingray. Still, the show had some great action and comedy and concepts. The toy like models adds to the appeal in my mind. Look past some of the 80's styles and there is lots of fun with this show. 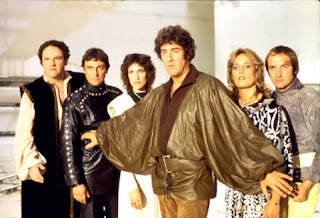 2- Blake's 7 (1978-1981) – This show has its ups and downs. When it is bad, it is bad but when it is good, there is really some excellent stories here with some fantastic characters. The show changes quite a bit and the early formulas that worked the best were lost with new and useless characters. Often compared to Doctor Who, Blake's 7 tries to be the more intelligent and realistic hard edged cousin and does so fairly well. A recent viewing dropped my opinion of this show a bit but still ranks here. 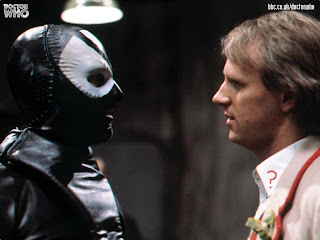 1 -Doctor Who (1980-1989) – This era in Doctor Who may be considered a time where too much was changed and the series was canceled. I think the series finally grew up. The show went in a more stylized less primitive way, perhaps sacrificing some characterization and story but creating more appealing visuals overall. The excitement level increased as the serialized live shooting style vanished from the screen. This style would be a very early blueprint for the return of the series. Moving into the 80's Doctor Who came up with s slew of classics including Kinda, Earthshock, Caves of Androzani, The Curse of Fenric. Mostly because there were so many excellent stories and partly because the 80's was void of anything else as good, Doctor Who reaches number 1 for the only time on my lists.

So I felt nothing in the 80's really worked well and can easily ignore many of the series on my list. Still, I found the UK coming through with some excellent series to save the decade. I did say early on I would rarely include anime and this is true but one show I am watching now, Dirty Pair, would probably rank high on this list if I included it.
So next up, the 70's and that has two of my favorites of all time!!
Posted by SHADOKP at 7:50 PM