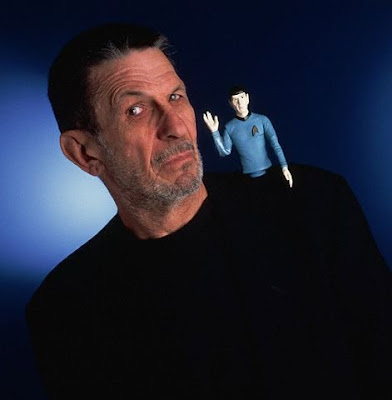 Leonard Nimoy has officially announced that he will retire from convention appearances after two more shows in Las Vegas and Chicago.

It starts with Creation Entertainment issuing a press release by email that stated, in part:

For us at Creation it is indeed a bittersweet day as Leonard’s on-stage talks have always been a highlight for us and they remain in our memories forever. We’ll never forget his original talks on being Mr. Spock, his on-stage appearances with William Shatner, his live Alien Voices shows with John de Lancie, and later his ceremonial passing of the baton to the amazingly talented young Zachary Quinto. Through it all Leonard has been extremely gracious and caring to both us and his legions of fans. Simply stated it has been a joy to meet someone we grew up with loving on television and film and then finding out he was even nicer than we could have hoped. A growing up memory that was actually exceeded by reality: that never happens but all things are possible with the magic that has been working with Mr. Nimoy.

The press release, posted at TrekMovie.com, obviously is intended to increase interest in the two Creation-sponsored shows that it mentions. (As if a Nimoy appearance wasn't enough publicity?)

But the folks at TrekMovie are aware enough to note that Nimoy also will be appearing Dragon*Con in Atlanta over Labor Day weekend.

Regardless, if this is the end of he convention road for the half-human, half-Vulcan that we first met a long, long time ago in a galaxy far, far away (our youth; apologies for mixing sci fi metaphors), we whole-heartedly agree with this statement from Creation:

God Bless Leonard as he enjoys his overdue retirement and we continue to enjoy his films, television series, books, photography and poems for generations to come!