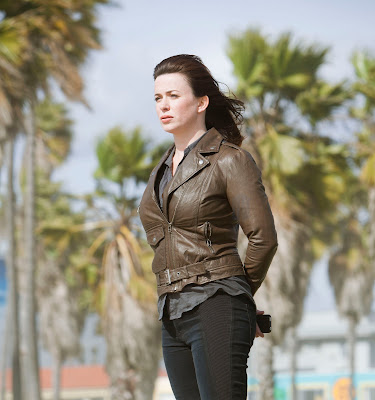 Escape To LA the next installment in the Miracle Day saga was a nice change from what we had seen in the previous three episodes.  In fact we actually had the Torchwood team doing 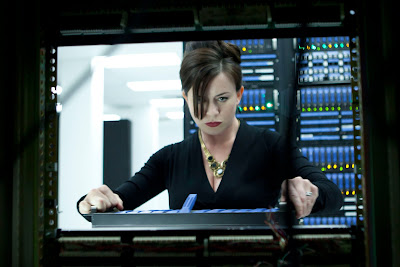 something.  In fact instead escaping and running away we see Torchwood getting their hands dirty by going undercover to find out what is up.  It was good to see Jack and Gwen working together again.  it was nice to see them bust out the technology and seeing them going undercover.    We also get more insight into the character's of Rex and Esther by seeing them visiting their family.  Both those scenarios don't have happy endings and in Esther's case she almost gets Jack and Gwen killed.  It appears Esther was followed from her sisters home by a hit man working for Phicorp or someone that knows Jack from long ago.  Unfortunately we have to wait for that revelation as Rex shot him in the throat before he told Jack and Gwen who they were.   In fact this move gets Esther on thin ice as Rex gives her one more chance or she is out.  80's movie fans keep your eyes open for C. Thomas Howell as the hit man hired to get Jack. 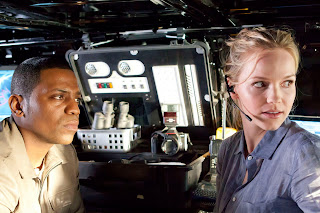 Speaking of character development we get more into the head of Oswald Danes as he keeps getting closer to being a deity.  If you haven't been noticing Oswald Danes is setting himself up to be a sort of second coming and rallying all the dead who aren't dead to his calling.  It's almost if that soon enough he will have his own Church of Oswald.  Yet again I can't rave enough about Bill Pulham's performance.  He is giving one hell of a performance and his portrayal is really freaky.  Just take that scene where he walks into the plague hospital and talks to all the dead is dead people.  Really well done and mesmerizing plus his interaction with Jilly is pretty good and helps to enhance the Oswald Danes character.. Here you have this guy who did a really bad thing but he has a way to spin it around and make you love him.  Oswald Danes is probably one of the strangest and most evil characters that Russell T. Davies has ever come up with. 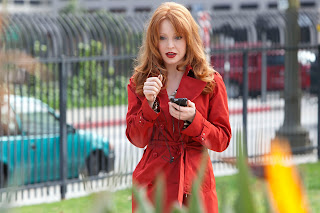 Escape to LA does open up more questions and does reveal more revelations about what to do with the dead is dead people and it hit home with Gwen as she finds out her dad is now in a camp for the dead is dead people.  It appears that Phicorp is rounding them up and putting them in camps.  Plus we also get a hint of who might be behind this.  It appears to be a mystery but we do know when he's talking to you it is on a screen with triangle.  Escape to LA had one of the weirdest murders ever as the politician mayor that is causing trouble for Phicorp was put into a car crusher.  Since people can't die right she is in sense still alive but all crushed up in a metallic cube of the car.  Not the way to go. 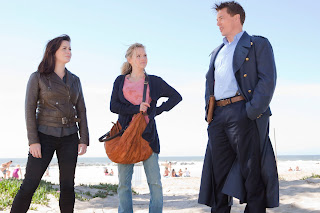 Escape to LA was an enjoyable episode with a lot more action and a lot more to do for the Torchwood group than sitting around and doing nothing but talking things out.  Plus we get to know more about the new character's and what makes them tick a bit.    A good episode with some good moments and enjoyable to watch due to the fact that it doesn't kill your brain with stuff to figure out.  Not as good as the previous three episodes but a fun one to watch.
Grade B+
Posted by DR5WHO at 11:26 AM