Evangeline Lilly On Her Hobbit Character 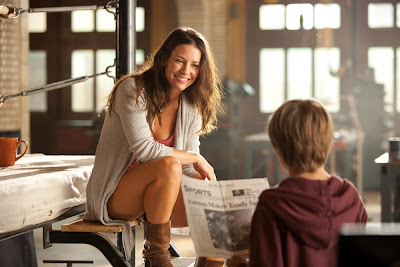 Evangeline Lilly has done an interview where she discusses her made for the Hobbit movie only character the elf Tauriel.


Yes, she is a warrior. She's actually the head of the Elven guard. She's the big shot in the army. So she knows how to wield any weapon, but the primary weapons that she uses are a bow and arrow and two daggers. And she's lethal and deadly. You definitely wouldn't want to be caught in a dark alley next to Tauriel.

So then Tauriel must be involved with the dwarves being captured

I think basically what you're asking is if she's in the film very much. She's not in the first film very much. She comes into the first film near the end, and has a very small part to play. Her role in the second film is much more involved. Although, I have to say, when I first read the scripts and took the job, she had a lot less going on in the second film. I think the role is becoming a bit more demanding than I had expected it to be. There's a lot more for me to do now, which is a lot of fun, but it's a little more pressure.

For fans of the book will know that there isn't a Tauriel in the book.  She will most likely be in the second Hobbit film where Peter Jackson will take liberty with filming what happened when Gandalf takes his leave.
Posted by DR5WHO at 9:24 AM

Email ThisBlogThis!Share to TwitterShare to FacebookShare to Pinterest
Labels: The Hobbit