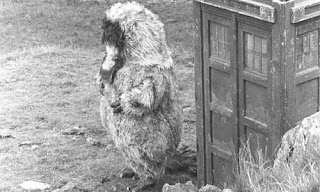 It is possible that two classic villians could be returning to Dr Who in series 7.  Marcus Wilson has been quoted in Dr Who Magazine about this and if it turns out to be true it would be pretty cool news.  I'm willing to bet that one of the classic villians returning will be the Daleks but it is being rumored that the Yeti will be making a return.  The Yeti are robotic creatures controlled by the Great Intelligence.  They were mainly a Second Doctor Villian and footage of them survive in a few episodes.  If true it would be pretty cool to see the Yeti get a modern day makeover.

Email ThisBlogThis!Share to TwitterShare to FacebookShare to Pinterest
Labels: doctor who, The Yeti