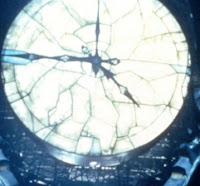 Some of my favorite sci-fi movies are mysteries. They have an almost Twilight Zone feel to them as the story unfolds and a major reveal happens. Most movies have some kind of story that reveals answers as they go along. A movie like The Abyss sets up some strange happening and the audience gets to see the answer by the films end. The following movie has this type of mystery that includes a very good pay off.

I don't always like cut and dry answers and as you will see in this and many reviews, endings don't have to be spelled out all the time. 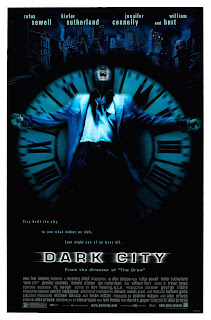 I have only seen this film three times. Up until just recently I had not revisited it in years. One does not have to see a film a bunch of times to enjoy it or even put it on their top lists. The recent viewing of this film was of the director's version of the film and since it was so long ago since I have seen the film, I didn't really notice much different other than the lack of prologue that gives you the entire secret of the story ahead of time. Why must films be dumbed down so often is another mystery.

Anyhow, Dark City is an outstanding film about self, perceptions and reality. The noir look and atmosphere adds to feel of the film. 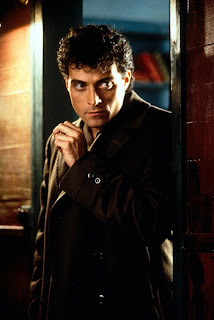 IMDB Story Summary
John Murdoch awakens alone in a strange hotel to find that he has lost his memory and is wanted for a series of brutal and bizarre murders. While trying to piece together his past, he stumbles upon a fiendish underworld controlled by a group of beings known as The Strangers who possess the ability to put people to sleep and alter the city and its inhabitants. Now Murdoch must find a way to stop them before they take control of his mind and destroy him.

When preparing for this article I realized that it had been over 10 years since I had seen this film. That is much too long to not experience this movie again. I went out and got the blu-ray and watched the director's cut. I liked this version as it didn't have everything explained to the audience. For the most part, we are not as dumb as studios think we are, I think.

Like many films on my list, this one has some incredible imagery not only with the effects but the sets and filmography. The look reminds me of Metropolis, Blade Runner in that noir like style. 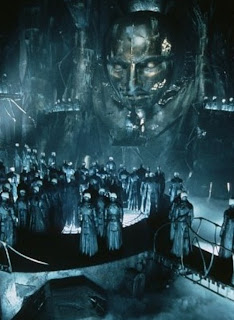 The idea that reality is changed overnight follows along a common theme of not being in control of reality. Not everything is as it seems and we are not in control of our lives. Elements of this theme exist in other movies on my list like Inception and in other excellent films like The Adjustment Bureau and The Truman Show. It is an interesting idea that Dark City perfects to a high degree. Interestingly the aliens in Dark City and the men of the Adjustment Bureau both wear hats and are not fond of water.

Good performances, especially by Keifer Sutherland and Jennifer Connelly, highlight some of the other good points to the film.

When did I first see this film – opening weekend
How many times have I seen it – as of my latest viewing, only 3
Do I have it on DVD/Bluray – just got it on Bluray