This could be a controversial pick or perhaps more accurately, a controversial omission. The following film is often placed in the horror category but because of the amount of sci-fi elements, I felt it belonged here. 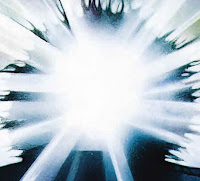 Before I continue I want to mention something about my estimates on how many times I have seen a movie. First off, the number of times someone has seen a film doesn't dictate how much they may like a it. Sometimes one may be content in only seeing the movie a few times or even once. People generally do see a movie more often when they like it but that is not always the case. Concerning my amounts – to the best of my knowledge they are rough estimates that are relatively close but you may notice the numbers may be low compared to other people who claim to have seen certain movies hundreds of times. My estimates are based on the number of years the film has been out and how familiar I am with the movie. Some movies I see every couple of years while others rarely. These numbers are watching the movie completely and not just watching a few minutes here and there. Oh, and very few of these have I seen in the theater, most have been on TV. 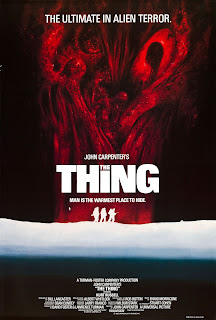 One of my favorite directors is John Carpenter and this is the first of two movies of his on this list.

Story Summary - From IMDB - An American scientific expedition to the frozen wastes of the Antarctic is interrupted by a group of seemingly mad Norwegians pursuing and shooting a dog. The helicopter pursuing the dog crashes leaving no explanation for the chase. During the night, the dog mutates and attacks other dogs in the cage and members of the team that investigate. The team soon realises that an alien life-form with the ability to take over other bodies is on the loose and they don't know who may already have been taken over. Written by Goth <brooks@odie.ee.wits.ac.za>

The Thing conveys incredible paranoia and tension, more so than many films. Immersed in the sci-fi element, the horror of some unseen creature imitating people and potentially infesting the world is a powerful idea. The atmosphere of the movie builds right off the bat with an incredible performance by that dog who doesn’t quite act normal. Little by little we see the world around this small Antarctic base crumble into chaos. The viewer loses track of who is who and who might be infected. In the end we don’t trust anyone and it is hard to root for one hero because we aren’t sure they are human or not. 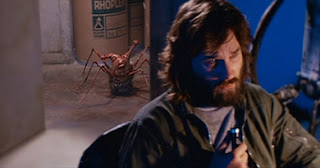 The original The Thing From Another World (1951) is certainly a classic and for those who feel that the original version of any remake has to be better, I cannot argue. The original film has its merits but it was from a different time. The 1982 version captures the emotion and tension but also presented us something so grotesque and alien that all we could do was just watch in horror as these half formed shapes splashed onto the screen. The effects are outstanding and are one of the many examples why sometimes CG effects are not as convincing. 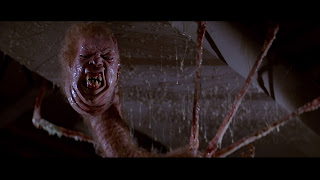 One of the reasons I include this film in this list is my initial reactions to watching it. Not being able to shake the imagery from my everyday thoughts and constantly thinking about the film and remembering how shocked and scared I was are definitely some good reasons why it is placed here.

Email ThisBlogThis!Share to TwitterShare to FacebookShare to Pinterest
Labels: review, the thing, the thing 1982, the thing review, top 25 movies