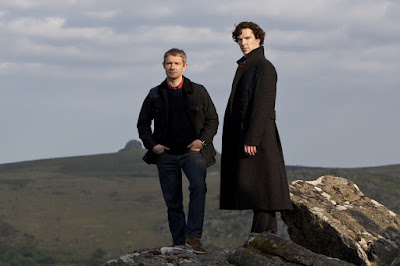 Sherlock
The Hounds of Baskerville
By Mark Gatiss

"Mr Holmes they were the footprints of a gigantic hound."

When Sherlock Holmes is mentioned a few things come to mind.  Like Dr. Watson, World Famous Detective, Prof. Moriarty and of course The Hound of the Baskervilles. Well now the brilliant updated Sherlock tackles what is probably the most read and adapted for TV or Movies.  Since the Hound of the Baskervilles is the most famous Sherlock Holmes story does this new updated version cut the mustard per say? 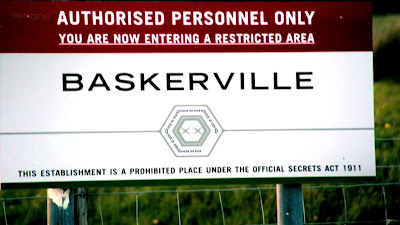 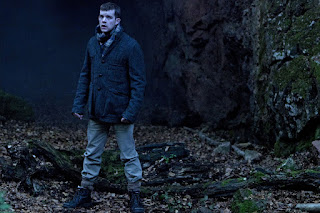 Wow. That more or less sums it up for me. Wow, wow, wow.  I really enjoyed this new retelling of the classic story and bringing in a modern feel to it.  Like during the conclusion by having the hound being  drug induced by the fog in the moor.  I thought that was pretty clever even though I figured it out mid way through watching it.   Oh and there was a hound also.  The Hound was cleverly interjected into the story as a pet that a restaurant owner bought to capitalize on the tourist attention their area of England was receiving from the documentary about Henry Knight (played magnificently by Being Human's Russell Tovey) and the supposed hound that killed his father. 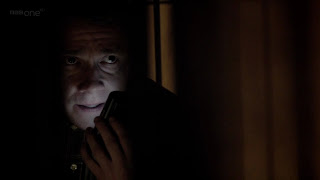 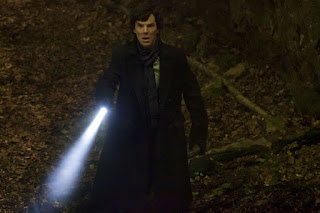 In this new version there isn't any Baskerville family but instead Baskerville is an army base that has done experiments on animals and weapon development.  Definitely the place that you would expect to manufacture a huge hound capable of killing people on the moor.  This new updated Hounds was very scary and spooky.  Mainly due to Mark Gatiss love for horror for which was front and center in this story.  Most notably when Watson was looking for the hound in a lab at Baskerville and ended up being locked in the lab with the supposed hound.   Very intense and scary scene indeed as you could feel the fright within Watson as he locked himself in the cage to protect himself.  It was scenes like that one that made this an excellent story to watch.

I also enjoyed  seeing Sherlock out of his element.  In most of the stories so far Sherlock has always had a logical explanation for what is going on. He seemed to have seen a hound or something in the moor that defies his logic. Which leaves him to get flustered and confused as to what is going on.   Everything revolves around logic for him and it was good to see him struggle for once with the events that were going on.  I did love the comment that Watson gave Sherlock during Sherlock's meltdown comparing him to Spock. 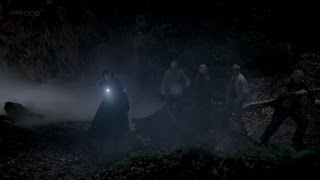 There are a few similarities between this new take on the story and the original. I think this new one will satisfy the hardcore Sherlock Holmes fans and probably alienate a lot of them also.  There is one aspect from the original that gets a funny twist and hopefully most of the Holmes fans will pick up on it. Hint, it has to do with a light.  So in all this was a top notch story that had few flaws.  Well, the one flaw that I had a problem with was the insertion of Lestrade.  It just seemed like a throw away for me when they could of used any old police man instead of having Lestrade just show up.  This was a very minor problem for me and did not really detract from the story at all.   So far the first two stories of the second season of Sherlock have been top notch.  I have really enjoyed the updated versions of two classic Holmes literary icons in Irene Adler and The Hound.  Lets hope this roll continues for the finale.
Grade A

Email ThisBlogThis!Share to TwitterShare to FacebookShare to Pinterest
Labels: Sherlock, Sherlock Series 2, Sherlock The Hounds of the Baskerville