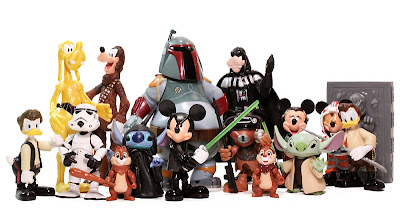 Some more details about the deal from aintitcool.com

1) Disney now owns all Star Wars, Indiana Jones, and ILM (the company that once owned Pixar), as well as the trademark for "Android" or "Droid". Disney will now own all intellectual property rights with some distribution and licensing exceptions based on existing deals, much like how Universal still has the Marvel theme park license for a while yet.

2) Much was made of Disney's global licensed product and distribution reach making better use of LucasFilm licenses, with all emphasis on the $4.05 billion paid being relative to the value of the Star Wars franchise. For example, this would imply that any Star Wars (and Indiana Jones?) licensed comic books will now go under Marvel once the current Star Wars/Dark Horse contract ends, and video games would go through Disney Interactive.

UPDATE 1:: Bob Iger: "We're likely to focus more on social and mobile than we are on console. We'll look opportunistically at console, most likely in licensing rather than publishing, but we think that given the nature of these characters and how well known they are, and the storytelling, that they lend themselves quite nicely, as they've already demonstrated to the other platforms"

4) Star Wars Episodes 7, 8, and 9 will be a trilogy. The treatment is done, is in "early stage development", and the movies are to be released every other year.

5) ILM will remain a studio-agnostic gun for hire. Disney does not want to change anything about how they operate.

6) Fox retains ownership and distribution of all existing Star Wars movies (until that contract expires...?). All future films will be distributed solely by Disney, unlike Paramount retaining partial distribution rights when Marvel was acquired. No mention was made of who now owns the Star Wars Holiday Special.

This leaves us with tons of questions.  Will there be a new Indiana Jones?  What about the planned Star Wars live action series? What will the next Star Wars trilogy be about?  And so on - very exciting news for sure!!