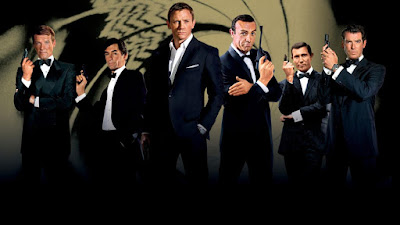 With the US release of Skyfall coming up very soon I thought it would be cool to reveal my Top Ten James Bond movies.  I have watched these movies tons of times and have loved watching them.  So this was a hard list for me to make.  Like all top 10 lists this one is my favorites and I’m sure people are going to like or dislike my choices and placing.  So here they are.  The first of my list of movies number 10 to 6.  Movies 5 to 1 will be released around the US Premiere of Skyfall. 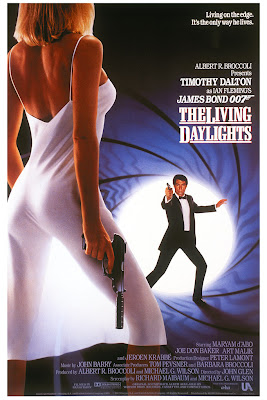 Plot by IMDb
James Bond 007's mission is to firstly, organize the defection of a top Soviet general. When the general is re-captured, Bond heads off to find why an ally of General Koskov was sent to murder him. Bond's mission continues to take him to Afghanistan, where he must confront an arms dealer known as Brad Whitaker. Everything eventually reveals itself to Bond. Written by simon 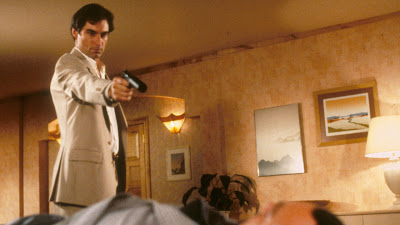 Why it’s on my list.
I for one liked this movie mainly for the tone they tried to convay.  Timothy Dalton played a more rugged Bond that was more serious than Roger Moore’s.  Plus the movie didn’t have as much ha ha scenes that were a staple of the Roger Moore era.  Yes it did have its moments but for the most part it was a pretty good story and often overlooked due to the fact it was a Timothy Dalton Bond film.  This isn’t fair because Timothy Dalton wasn’t bad it was just the Bond movie he did next which sunk him. 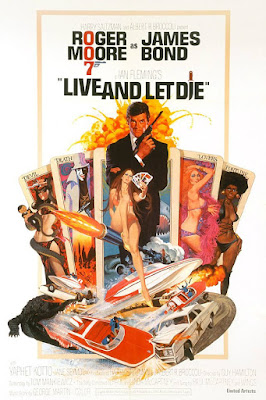 Plot by IMDb
When Bond investigates the murders of three fellow agents, he soon finds himself a target, evading the vicious assassins as he closes in on the powerful Kananga. Known as "Mr. Big," Kananga is coordinating a globally threatening scheme using tons of self-produced heroin. As Bond tries to unravel the mastermind's plan, he meets Solitaire, the beautiful Tarot card reader whose magical gifts are crucial to the crime lord. Bond, of course, works his own magic on her, and the stage is set for pulse-pounding action sequences involving voodoo, hungry crocodiles and turbo-charged speedboats. Written by Robert Lynch docrlynch@yahoo.com 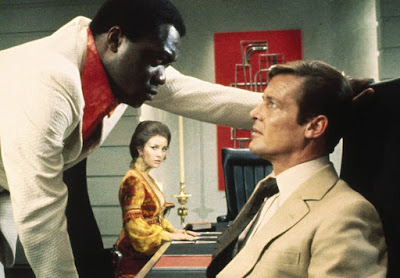 Why It’s on my list
The fact that it was Roger Moore’s debut replacing the ever popular Sean Connery and coming in with a killer performance was a plus for me.  The series with Roger Moore took on a silly aspect and shied away from being serious.  Roger Moore was a perfect choice and he can ham it up with the best of them. What is really cool is the chase on the river with the power boats.   I do love this story as Roger Moore isn’t to over the top yet.  Plus Live and Let Die is a different type of story involving drug smuggling and not the take over the world stuff we all have been accustomed to. 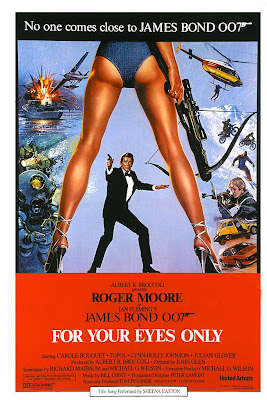 Plot by IMDb
After a ship sunk off the coast of Albania, the world's superpowers begin a feverish search for its valuable lost cargo: the powerful ATAC system, which will give its bearer unlimited control over Polaris nuclear submarines. As Bond joins the search, he suspects the suave Kristatos of seizing the device. The competition between nations grows more deadly by the moment, but Bond finds an ally in the beautiful Melina Havelock, who blames Kristatos for the death of her parents. The non-stop action includes automobile chases, thrilling underwater battles, and even a breathtaking tour over razor-sharp coral reefs. But all of this is merely a prelude to 007's cliffhanging assault of a magnificent mountaintop fortress. Written by Robert Lynch docrlynch@yahoo.com 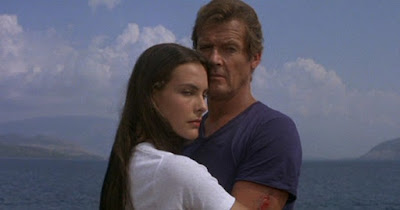 Why it’s on my list
I enjoy this one mainly for the reason that Roger Moore plays this one, for the most part, straight.  Not over the top and overly hammy Roger Moore is on his game in For Your Eyes Only.  I loved snowy the chase through the winter games like the bobsled and ski jump as Bond shows off his skiing skills.  Plus a really cool pre credits scene involving a helicopter. 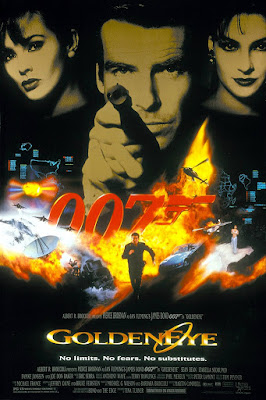 Plot by IMDb
1986 - Soviet Russia has been arming international terrorists with chemical weapon technology, and a chemical weapons plant in the mountains is the target of James Bond and his closest compatriot, Alec Trevelyan. Infiltrating the compound, they are spotted and Alec is captured. When a ruthless Soviet officer, Oromov, executes Trevelyan, James pulls off a spectacular escape and succeeds in blowing up the compound. Now in 1995, he is assigned to tail former Red Air Force jet jockey Xenia Onatopp, who is working for a Russian crime syndicate known as Janus, but he is unable to stop her from stealing a powerful helicopter - a theft initially dismissed as a possibility by MI6's new leader, a woman who is a bureaucratic bean counter who, despite her acidic responses to grumbling from her ticked-off men, is having to learn her job as she goes, and who has to trust James Bond's instincts after a nuclear accident occurs over a Russian region housing the tracking station for a weapons satellite known as Goldeneye. James must track down the stolen gunship and all leads to a second Goldeneye system, and along the way he is horrified to find the true identity of the Janus syndicate, which leads to a spectacular running pursuit from the stolen gunship through a Soviet army prison to a wild street chase involving a tank and confrontation with a Soviet missile train, and eventually a showdown in the jungles of Cuba. Written by Michael Daly 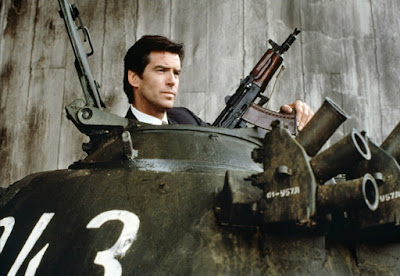 Why it’s on my list
Well for a debut movie as James Bond Pierce Brosnan got an awesome film.  A great story and lot of action reward the fans that have waited 6 years for the franchises return.  I just loved this movie from start to finish.  Favorite part of the whole movie was the chase scene through Moscow with the tank.  That was brilliant.  Plus it had a great cast especially with Sean Bean as the villain.  Plus this movie showed a side of Bond we’ve never seen before.  As they played on Bond’s emotions over Alec becoming a traitor and lying to him all those years ago.  Plus the final fight scene with Bond and Alec is top notch and action filled brawl to satisfy the hardcore fans.  Plus how could you not love Famke Janssen as Onatop. 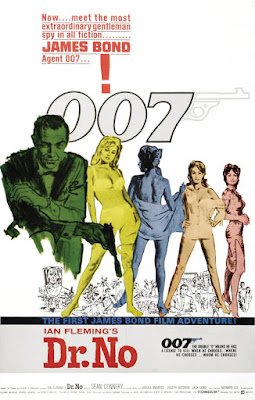 Plot by IMDb
James Bond 007, seductive British secret agent, has been sent to the West Indies to investigate the disappearance of British agent John Strangway and his secretary. Once arriving, 007 become suspicious of scientist Professor Dent, who was the last person to have seen Strangway before he disappeared. After learning Professor Dent is working for a terrorist with a metal hand Dr. Julius No and Strangway is dead, 007 meets CIA agent Felix Leiter and his assistant Quarrel in Jamaica. 007 and Quarrel head to the tropical island Crab Key, after encountering the beautiful Honey Ryder, 007 finds the island is Dr. No's secret lair and 007 and Honey are captured but Quarrel is killed. Where 007 learn Dr. No is has been disrupting the American rocket launches at NASA and he is out for world domination and plots to unleash his vengeance on the United States of America. Can James Bond defeat Dr. No and save the world? Written by Daniel Williamson 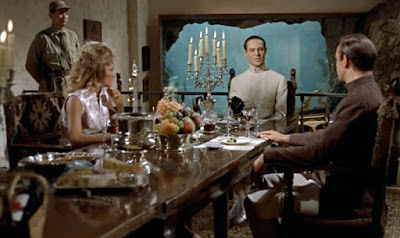 Why it’s on the list.
It’s on the list because it’s the first Bond movie.  Plus by chance it was the first Bond movie that I watched.   This, by sentimental reasons, means that Dr. No was the movie that got me hooked on James Bond and all the movies that came after.  Dr. No is a great movie that has the right amount action to compliment the excellent story.  For a movie that is 50 years old it still holds up.  Dr. No does a great job introducing the character of James Bond and to all the traits that we incorporate the name with.   Dr. No is a classic movie with some fine moments that has spawned a 50 year phenomenon.