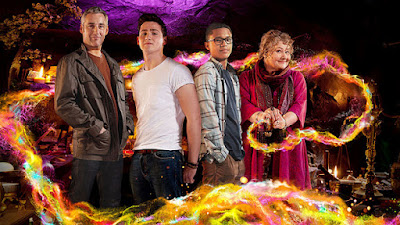 BBC - Media Center has released an interview with Russell T. Davies promoting his new childrens show Wizards Vs Aliens which will debut this month on CBBC.

Tell us about Wizards Vs Aliens – what is the show about?

Wizards Vs Aliens is a fun adventure story about a young boy called Tom and his best friend Benny. Tom’s secret is that he’s a wizard, and you think that would be exciting enough, but then they discover aliens exist and are coming to Earth to consume all the magic. Let battle be drawn!

What are the characters of Tom and Benny like?

The big hero of the show is Tom, he’s 16, and he’s secretly a wizard. At the beginning you think he’s the coolest kid at school, he’s good looking, he’s good at football, he does his homework with magic, he’s got it all.

He then learns that he’s got to grow up because he’s has to wage a secret war against aliens. As a result he becomes friends with someone he wouldn't normally become friends with, a kid called Benny Sherwood from his year at school, who’s a science genius.

Benny’s science know how is invaluable to Tom in his fight against the Nekross and though they don’t get on at first, during the course of the series they become best friends.

The Nekross are an alien race from the planet Nekron, who feed on magic. And now they've come to devour the wizards on Earth!  It's a secret war - schoolboy wizard Tom and his best mate Benny still have to cope with school and everyday life, while the Nekross are plotting on the far side of the moon.  And the battle's only just begun!

Gwendoline Christie and Jefferson Hall are marvelous as the Nekross, Lexi and Varg. We wanted brilliant actors, who had this huge stature on screen. They’re tall and elegant, which makes the Nekross incredibly imposing and very alien when we see them looming over Tom and Benny.

Is this a battle of good versus evil and is it always clear who is going to win?

At the heart of this it is good versus evil, but as the series goes on you learn more about the Nekross and realise that it’s not so black and white. The wizards become ruthless and sometimes their power can be used for dark forces so we explore good and evil as we go on.

How did you come up with the idea and how does this show differ from other fantasy/sci-fi shows?

I came up with the idea for this show with Phil Ford. We were having a discussion about how he likes supernatural shows and I like science fiction shows and the fact that we could never put the two together. Harry Potter never has to fight a robot and Doctor Who never has to fight a witch, the two things always kept very separate in every example of a genre. We just had a eureka moment. Why don't we do a show in which that happens? A show where magic fights laser beams and aliens meet wizards, the whole show came alive from that moment really.

What do you want children to get from watching the show?

What you really want children to have out of this is thirty minutes of fun and really exciting adventures. Sometimes they’re funny, sometimes they’re thrilling, sometimes a little bit scary. You want them to enjoy it but there are also some good lessons about life and friendship and family right at the heart.

Beautifully designed aliens, special effects, chases, gags, and monsters, are all things I want on television all day long.

There are differences in writing for adults and children but they are not profound differences. It’s just a matter of using a different voice for kids. That doesn't mean it's simpler, in fact I think you have to be a little bit sharper because children are such clever and sophisticated viewers. You've got to deliver something that’s as good as it could possibly be or you lose them and I like that challenge.

Was it easy to cast, or was it a long process?

How did you convince Brian Blessed to play the Nekross King?

All the way through filming we were saying we need someone like Brian Blessed. You don't imagine you’re ever going to get him. In the end we took a deep breath and said ‘Look, if he's meant to be like Brian Blessed, why don't we try Brian Blessed?’ We sent the tapes off to him and he loved it!  We’re so grateful to him cause there’s no voice like his, he's brilliant.

We have a composer called Sam Watts who worked on the Sarah Jane adventures with us and is extremely clever. This time we got the BBC National Orchestra of Wales and it’s amazing. The theme tune is my favorite theme tune of anything I've ever worked on. I just keep playing it. Once it gets in your head it drives you mad. It’s very compulsive, huge and brilliant.

What was it like working with BBC Wales and FME?

BBC Wales hit the ground running and they've got a lot of experience. With FME on board too, Wizards Vs Aliens brings together a group of very attractive partners who all know each other so it was a joy. There was immense amount of support from CBBC here in Salford with its new, huge Children’s department. I’m just glad to be part of that - I think it’s thrilling.

Was it good to be back working in Cardiff again?

For me to work in Cardiff it’s like going home. I first went to Cardiff in 2004 where I set up a sort of empire with Doctor Who, Sarah Jane and Torchwood. It was like our fantasy factory, so when we created Wizards Vs. Aliens that’s where we turned. We knew we would have the designers, the effects people, the costume people and so on to create a glorious show.

You've long been involved in children’s drama and must have seen it change and evolve. Do you have any thoughts on how it might look in the future?

I want Wizards Vs Aliens to run for ten years, I think there’s enough fuel in it for stories to run forever, I’ll take 20 years if people would give it to me.

There’s a good energy in Children’s at the moment because of this new base at MediaCity in Salford. I have been working in Children’s twenty five years now and people have been ringing the death bells about children’s television for all of those twenty five years but it keeps on existing. All it takes is imagination and a lot of people with a lot of imagination keep on flooding in to this industry.

Although you have to be careful - you should never take children’s television for granted. Its like, while there’s one lively mind out there, there will always be great programmes.