NYCC the very initials stand for a smashing great time.  The one weekend in October when geeks and fans of all walks of life converge on the City That Doesn't Sleep for four days of comic book and entertainment and all things geek.  There was something for everyone.  A majority of all the main comic book writers and artists from a majority of the big and small companies were there plus stars from the Walking Dead and Arrow to name just a few.  Plus movie galore like Silent Hill and Carrie had a big presence at NYCC as the stars from both shows graced the palace of geekdom or the Javits Center as it's really called. 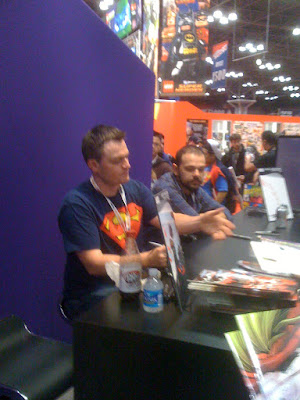 From October 11 to the 14th NYC was taken over by geeks and fine folk in costume.  Imagine walking down 42nd St and seeing a zombie or a super hero or one of the many anime characters.  It was indeed a cool sight seeing the mass hordes of fans walking down the busy streets of NYC. I have to truly say that there were some really cool costumes this year.  You can tell that the costumers were paying attention to detail and taking the time to making it right.  A great selection this year. 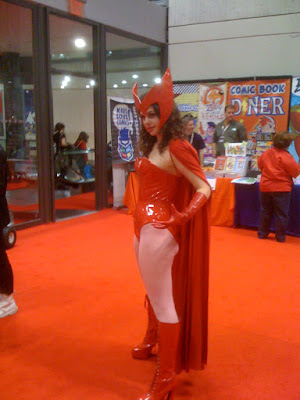 I had no complaints with NYCC this year.  I liked how they had the show laid out.  I thought having artist alley in its own area to be a plus as there were more artist and authors and the walk area was wider also to help accommodate the crowds. Putting the autograph area in its own area was another plus.  By having those two areas in their own area it left for more room in the main area for comic book dealers and companies to but their wears on display.  Plus it made for a hell of a lot more to see. 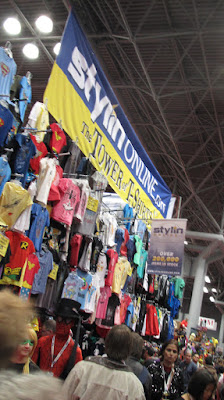 I'm sure that there must have been problems but I didn't see them.  I thought the autographs lines were organized and handled really well and the volunteers seemed to know what they were doing.  I really liked how organized the DC Comics booth was for autographs. Liked that they issued wrist bands for autographs for the bigger names.  It made the line easier as you didn't have to hang around the booth all day. Cause once you had the wrist band you were all set. 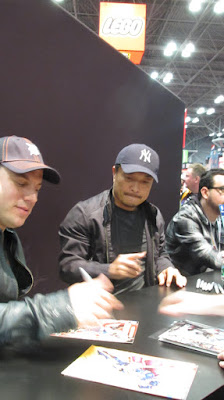 I really had a great time covering NYCC all four days and meeting with other members of the press and exchanging war stories and talking about our general interests in the geek world.  It was fun covering the panels that were a general interest for our blogs followers and talking to comic book creators. I met a lot of fans and had some pretty good conversations and everyone seemed to be having a great time.  Plus it was good to attend NYCC as a fan also.  I really enjoy NYCC and make an effort to attend this convention every year.  It is a professionally run show made to cater to fans of all ages.  Sunday is dedicated to kids how great is that.  NYCC is a show that I thoroughly enjoy  and will definitely be attending next year.
Posted by DR5WHO at 8:52 PM