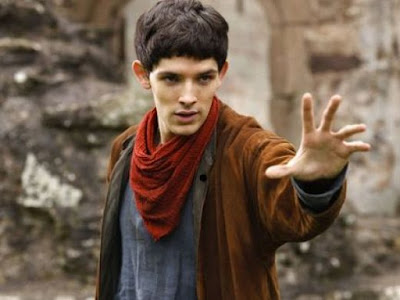 The BBC have released a bunch of interviews to promote Merlin Series 5.  Today we will post three of them.  Here is the fifth and final one from Colin Morgan who plays Merlin.


An interview with Colin Morgan who plays the eponymous hero in BBC One's Merlin.

Q: Why has Merlin been such a success right around the globe?

A: The Arthurian legends themselves have endured for hundreds of years already, and we're taking them to the next level. Also from series one, the characters just clicked in people's minds. The writers are so smart about that and are constantly developing the characters in a fascinating way. This fifth series is the most sophisticated in terms of storylines.

Q: Has the series also benefited from the huge current popularity of the fantasy genre?

A: Absolutely. The fantasy genre is so in at the moment. Viewers want to escape from their lives and watch something that is so separate from their everyday existence. People have always wanted to escape their lives – that's why they go to movies and the theatre. You can immerse yourself in another world for the duration of the show.

Q: Where are the characters at the beginning of this series?

A: Between the last series and this one, there has been a three-year gap. You get the impression the kingdom is now in very good shape. It is ruled by a King who is becoming grown-up. He has an impressive Queen by his side. They have a good relationship, and they are working very well together.

Q: Where does Merlin fit into all this?

A: He's very much part of it. His life's goal is still to get magic accepted. But the kingdom is the most settled it has ever been, and Merlin does not want to do anything that risks that. Arthur associates magic with fear, conflict and betrayal, and for Merlin to be connected to that would be a bad idea. However, as the series builds, Merlin is gradually bringing Arthur towards the point of confronting magic in the most dramatic fashion. It's very exciting, and people will want to see that. It's been Merlin’s big dream, but whether it goes to plan or not is another story…

Q: What is it about Merlin and Arthur’s relationship that viewers enjoy so much?

A: They are the king and his servant. They are obviously from very different backgrounds, but they work together towards the same end. Merlin is the unsung hero who is often responsible for things turning out positively, but rarely gets credit for that. The relationship also succeeds because Bradley and I have been working together for five years. People love the banter between the two characters – that's a very big part of it. Even in the most serious situations, Merlin and Arthur find something to lift them – that's a huge part of their friendship. You look for comic relief in difficult times. Unfortunately for Merlin, Arthur often takes the mickey out of him, and Merlin can't answer back – he just has to take it!

Q: Are you pleased that the show attracts such devoted fans?

A: Definitely. The fans are so supportive. It's amazing when you work on something for so long and find that your fans match your passion – and in many cases exceed it. That’s really gratifying.

Q: Do you generate a lot of attention when you shoot at the chateau in France that doubles for Camelot?

Q: Do you feel Merlin can continue for several more years?

A: There are always new avenues you can go down. The legends have lasted for centuries, and they can always be revamped and retold. You always want to be part of something you're so passionate about.

Q: Finally, do you think viewers will be thrilled by the fifth series of Merlin?

A: Absolutely. I don't think the fans will be disappointed in the slightest by this series. In fact, I think they'll be gripped!