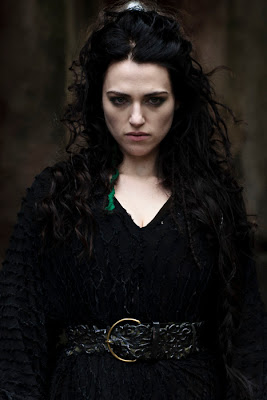 The BBC have released a bunch of interviews to promote Merlin Series 5.  Today we will post three of them.  Here is the third one from Katie McGrath who plays Morgana.


An interview with Katie McGrath who plays Morgana in BBC One's Merlin.

Q: Please tell us what is occurring with Morgana at the start of series five.

A: In series 4, you still had vestiges of an uncertain, unconfident Morgana. She still had Agravaine there for support. Now in series 5 she is on her own, and entirely in control. She's the boss. She's become extremely powerful, a force to be reckoned with.

Q: How would you characterize Morgana's campaign against Arthur?

A: It's a plea for tolerance. She's misunderstood. The problem is that the story is told from Merlin's point of view. If it was told from Morgana's point of view, it would be fine. I think they should rename the series! I think we need a new show called Morgana!

Q: So do you enjoy playing this new dark version of Morgana?

A: Absolutely. I have played her good side and her bad side, and her bad side gets all the best lines! There is such richness to be found in badness. She's extremely manipulative – which I love! And she uses people to her own ends - which I also love!

Q: Do you regard her as an out and out baddie?

A: No. A lot of people say to me, "She's so evil". I'm not sure whether to take that is a compliment, but I don't agree with it. No actor can play a villain if they don't sympathize with him or her – otherwise the character just becomes a two-dimensional caricature. I believe that Morgana is right. I've had lots of arguments with Colin and Bradley about this – "Colin, if Merlin had just stepped in and helped Morgana in series two, none of this would have happened. It's all your fault!" I think she's doing it for the right reasons. I don't think she's selfish. She simply doesn't want to live in fear of being exposed as a magician. She knows that, sister or no sister, Arthur would put her to death on the spot if he ever found out she had magic powers.

Q: Why do you think Merlin has chimed to such an amazing degree with international audiences?

A: It's a universal story. It's about good and evil. The legend is very well-known, but our spin on it is that people have to deal with who they are. It's about acceptance and growing up. Also, the show has brilliant characters. They have really matured over the five series, and their relationships are so intriguing. Viewers relate to these characters. What captures their imagination is thinking how they might react in similar situations. I’m sure people would want to be like Morgana – and not just for her fantastic costumes!

Q: Do you enjoy shooting in the French chateau that stands in for Camelot?

A: Yes. You can't minimize the effect of that place. It puts everything in context. It sounds trite, but every time I see the chateau, I'm reminded of the magic of this show. It's a public moment because there are always a lot of fans there. But that's a good thing because it makes me realize how much people love the show.

Q: Do you appreciate the fans of the show?

A: Absolutely. We get fan mail from all over the world, from China, Turkey, Germany and Canada – and that makes you see how far the show has traveled  It also makes us realize what we've managed to achieve. I get sent lots of jewelry by fans, and that's absolutely lovely. The boys get sent stranger things! Bradley got a whole set of knives from Romania through the post, while Colin got a giant one and a half foot long chocolate egg from Australia. If you can believe it, it arrived intact! That just goes to demonstrate the worldwide success of the show

Q: Do you feel there are loads of new places to take this show?

A: Definitely. There is a wealth of Arthurian legends, and we haven't told 10 per cent of them yet. As long as there is the desire to do it, I don't see why it shouldn't continue. I would be very happy to carry on as Morgana. I don't want to let her go until her story has been fully told. I wouldn't do that disservice to her. I'm hanging in there until she's done. They're not getting rid of me that easily!

Q: Finally, would you fancy hanging out with Morgana?

A: No! I don't think she'd be much fun. I couldn't imagine going on holiday with her. She can't relax. I can't see her trying to chill out by the pool with a Cosmopolitan!
Posted by DR5WHO at 1:00 AM