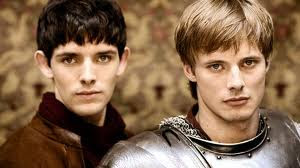 The BBC have released a bunch of interviews to promote Merlin Series 5.  Today we will post three of them.  Here is the fourth one from Bradley James who plays Arthur.

An interview with Bradley James who plays King Arthur in BBC One's Merlin.

Q: Why has Merlin struck a chord with audiences all over the world?

A: The Arthurian legend relates to all nations, not just our own. This version of Merlin also connects with viewers everywhere because of the gripping way in which the creators have told the story. That's been really refreshing and has offered viewers tremendous escapism. The stories translate wherever you are in the world – as long as the dubbing is good! I've seen a few versions in different languages, and some of them are quite funny. In Italian, we all sound like characters from The Godfather, while in the French version we all sound rather effeminate. And I sound really quite angry in Japanese!

Q: What is going on at the beginning of series five?

A: There has been a three-year gap in Camelot since the last series, and Arthur has had four years as King. He has a very good relationship with his new Queen Guinevere and has settled into the role. The land is prosperous and in a good place. But of course, harmony doesn't make for good drama, so in this series we tell the story of how Morgana suddenly turns up and starts rocking the boat.

Q: How does the relationship between Arthur and Morgana unfold?

A: Arthur is more prepared to deal with her this time – he is not a rookie anymore. They have the relationship of a brother and sister who have seriously fallen out. He used to look out for her, but now she has turned to the dark side in the most dramatic fashion. However, Arthur still holds out some hope that he can bring her back to her senses and that they can get back to the way they were. It's like when someone falls ill; you find yourself clinging onto the smallest amount of hope they will be the same again – "maybe one day they'll come back". That's how I have been describing it myself when I been doing scenes with Morgana. If he could save Morgana, he would jump at the opportunity. But he can't because she's gone little bit psychotic and passed the point of no return. So as always, Arthur must concentrate on his primary responsibility, which is to defend Camelot.

Q: Where is Arthur's relationship with Merlin at the moment?

A: Throughout the show, that relationship has been something that has worked really well. The fans have really responded to it, and in turn the producers have built it up – if it ain't broke, don't fix it. Why do people love that relationship so much? I think that if you have someone in your life with whom you really get on and with whom you go through a series of quite extreme events, you truly bond with that person. Viewers watch it and think, "I'd like to have a friend like that".

Q: Can you expand on that, please?

A: In Merlin, Arthur has a very loyal friend who keeps him on his toes. Arthur enjoys those challenges, and there is a lot of great banter between them. Meanwhile, in Arthur, Merlin has a friend he can really rely on. Merlin knows that when it comes the crunch Arthur will always do the right thing. Arthur is a great man to have by your side in a crisis. They also have a great rapport and enjoy each other's company – despite not admitting that! The fact that Arthur always brings Merlin along on the most dangerous missions without any chainmail shows how much he needs him. Merlin never says, "Shouldn't I be wearing armour? I'm completely ill-prepared for this mission." He just accepts it, as he has been doing it for years. People really identify with their relationship. They think, "If I had someone like that in my life, I'd be very happy indeed."

Q: What element of the series have you most enjoyed?

A: My favourite part of filming is the stunts. We have just filmed a battle scene with 10 stuntmen, and that was a lot of fun. They are great guys to be around – they have terrific ideas and freshen things up. It's such a thrill to work with them. You know all these stuntmen could beat you up without batting an eyelid. But when we do these scenes, you pull out all these flashy moves and they conveniently take a dive, and you come out of it looking brilliant! I've always been into athletics – that's a big part of who I am. So it's such a bonus to have these stunts as a major aspect of playing Arthur.

Q: Finally, how do you reflect on the experience of playing King Arthur thus far?

A: This is the role I been waiting for all my life. Because of the nature of King Arthur and the resonance he has not only with within the UK, but right around the world, I have found it a huge honour to play the part. I will look back on it very fondly and be very proud to have been King Arthur when I finally hang up the chain mail!