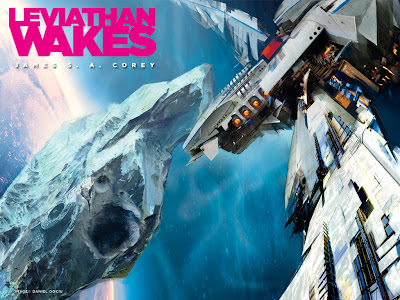 Book review by Ken Parker
Humanity has colonized the solar system - Mars, the Moon, the Asteroid Belt and beyond - but the stars are still out of our reach.

Jim Holden is XO of an ice miner making runs from the rings of Saturn to the mining stations of the Belt. When he and his crew stumble upon a derelict ship, The Scopuli, they find themselves in possession of a secret they never wanted. A secret that someone is willing to kill for - and kill on a scale unfathomable to Jim and his crew. War is brewing in the system unless he can find out who left the ship and why.

Detective Miller is looking for a girl. One girl in a system of billions, but her parents have money and money talks. When the trail leads him to The Scopuli and rebel sympathizer Holden, he realizes that this girl may be the key to everything.

Holden and Miller must thread the needle between the Earth government, the Outer Planet revolutionaries, and secretive corporations - and the odds are against them. But out in the Belt, the rules are different, and one small ship can change the fate of the universe.


I wanted to read a novel that took place in outer space. My last few books were Earth based and so it was time for spaceships, asteroids and possibly some aliens. Leviathan Awakes fit that description fairly well and reminded me of many other types of Sci-Fi adventures like Babylon 5 and Battlestar Galactica. We basically have two men who are on different missions but wind up working together to save mankind. The trip there is pretty fascinating. The characters, Miller and Holden take turn as the primary character of each chapter. The difference between the two men is well explored and really works well to balance the novel. At no time did I feel bored with one story or the other and when the two come together, the different perspectives is well executed. 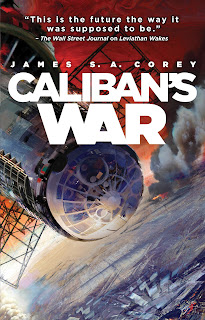 The story itself is pretty simple but is layered with elements of space battles and drama, romance, horror and even a detective mystery. The story is also anchored in reality and the authors do a good job with description and creating a world that is realistic and believable. If you have read my reviews in the past you know that I tend to always visualize by readings as movies or TV shows and this one would work perfectly for TV. I see this as being a good Showtime or HBO type mini series.

Written by Daniel Abraham (The Black Sun's Daughter and The Long Price Quartet series) and Ty Franck, using the pen name James S.A. Corey, Leviathan Wakes (2011) is part of The Expanse book series with Caliban's War (2012) being the follow up. There are connections with the authors and George R.R. Martin and so one could see the idea of a TV show see the light of day in the future.

I enjoyed the many elements of the book and felt at times I was reading a plot of a video game like Halo. In away, the story does mirror Halo to a degree and while I felt the story seemed to dribble out toward the end, I look forward to reading more from The Expanse.