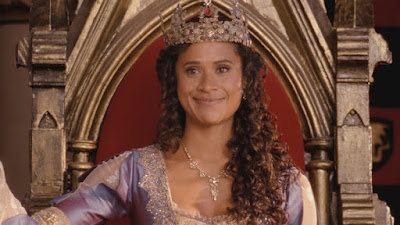 The BBC have released a bunch of interviews to promote Merlin Series 5.  Today we will post two of them.  Here is the first one from Angel Coulby who plays Guinevere.

An interview with Angel Coulby who plays Guinevere in BBC One's Merlin.

Q: Please describe where Guinevere is at the start of the fifth series

A: Having married Arthur, she's now Queen and is taking the role very, very seriously. She's become the Queen I always thought she would be. She has all the characteristics for the role. She is innocent, strong, humble but noble. She possesses that a great humanity, kindness and love, but at the same time she's not afraid to stand up and say what she thinks. She's very honest because she has realised that quality is very important in her new role. However, she can also be quite ruthless as she is fiercely protective of Arthur and the kingdom. She has to make decisions which are quite harsh, but they are all done in the name of defending the ones she loves.

Q: How would you characterize her relationship with Arthur now?

A: Arthur has changed and become much more responsible. He now takes much more notice of his heart – he's not ashamed of his emotions anymore. Guinevere has deep respect for him. They work together very well and make a really good team. He confides in her and respects her opinion.

Q: How does Guinevere get on with Merlin?

A: They're still very good friends. He knows that she is Queen and he must respect that, but they’re still good mates. She approves of Merlin's influence on Arthur. All the same, she would never want to get in the way of Merlin's relationship with Arthur. She appreciates that they have a "bromance" and she enjoys their bantering. Arthur and Merlin take care of each other, but they're also quite happy to mock each other. She doesn't want to put a stop to that.

Q: What is the jeopardy in this series?

A: It's the ever-present threat of Morgana. People in Camelot always fear her because she is a grave danger to Arthur. Guinevere is less worried for her own safety and more concerned for Arthur and the kingdom. It's painful having to live with that constant threat. You have to be always on your guard, aware that at any moment Morgana could just turn up and cause immense problems. Be afraid of Morgana, be very afraid!

Q: Why does the series appeal in more than 180 countries?

A: From the very first episode of the very first series, I remember thinking that I felt a lot of affection for these characters. I was not alone. Viewers immediately liked them. They have been very well drawn. Also, the Arthurian legend has been often retold in so many different ways down the centuries. It's a story that has really stood the test of time. It's full of intrigue, magic and fantasy. At its heart, the show has this great leader in Arthur. We would all like to be led by someone so brave and chivalrous and with such a good heart. In addition, the series looks tremendous. The CGI is absolutely fantastic.

Q: Why do you think the fantasy genre so popular right now?

A: People like to get lost in magic. In recent times, Harry Potter was one of the first big things that did that. You can lose yourself in a magical world because it's so different from the world we normally live in. Also, as a writer, you can go anywhere and do anything. It's exciting to be able to venture beyond the realms of everyday life. Immersing yourself in that is a very attractive prospect. Viewers love a bit of escapism.

Q: Do you get a kick out of Merlin's legions of fans all over the world?

A: Absolutely. The fans are been with us from the very beginning. They've enjoyed watching it grow and have stayed with us. Their numbers have increased dramatically over the years. When we first went to the chateau in France, we were met by four German girls sitting on a wall – I don't know how they knew we were coming! Now it's really exciting because hundreds of fans turn up to watch the filming. When you're going off to a studio in Cardiff, you can forget about the fans. But in France, you can't avoid them. It can be a little overwhelming sometimes. But it's a real compliment because they're so excited to see us, so you always have to smile. It doesn't pay to get annoyed. We only exist because of them. They're very friendly and they always tell you how much they love the show.

Q: Finally, why do you think Merlin continues to be such a hit?

A: The show is a fundamentally fun watch – you can escape for an hour into this fantasy world and forget about all your daily worries. I'd certainly be a fan of it, if I wasn't in it!
Posted by DR5WHO at 9:32 AM