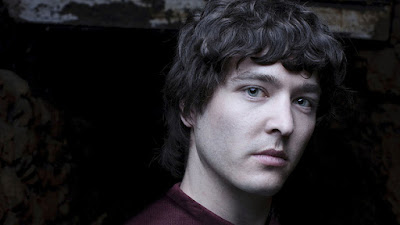 The BBC have released a bunch of interviews to promote Merlin Series 5.  Today we will post two of them.  Here is the second one from Alex Vlahos who plays Mordred.

An interview with Alex Vlahos who plays Mordred in BBC One's Merlin.

Q: Where do we find Mordred at the beginning of the fifth series?

A: We pick up with him at the beginning of the series, and see that he's older than that when we last met him – I've taken over the role from that excellent young actor Asa Butterfield. Mordred is still a druid, but now he is very ambiguous. You never quite know where his allegiances lie…

Q: Can you please expand on his ambiguity?

A: Mordred is not as straightforward as people think – he is far more intricate and complicated than that. "What's he going to do now?" – that's the question I keep asking. He is loyal, but to whom?

Q: Is he reunited with Morgana?

A: Yes. Mordred hasn't seen her for eight years. The last time he saw her, she was a girly princess in a green frock. He's been searching for her for six months and expecting the motherly figure he left behind who looked after him as a boy. So when he first finds her, he is over the moon. His emotions get the better of him, and he is overjoyed that the mission is complete.

Q: How do things pan out then?

A: He's soon taken aback to discover what Morgana has become. She loses her rag and turns on him. He's really shocked by this woman in front of him. She has grown up – her life experiences have changed her into someone completely different. Mordred has been on a quest to find Morgana. I think when it's finally realized  the audience will expect big hugs all around, but in typical Merlin fashion, expectations are immediately flipped on their head.

Q: So how does Mordred feel about Morgana now?

A: Beforehand, he was 100 per cent loyal to her. Now he has seen how she has changed, one per cent of doubt enters his mind, and things begin to unravel. Once you lose trust in someone so close, it's hard to get that back. That scintilla of doubt clouds his relationship with Morgana. That's the arc of this amazing series.

Q: Where do Mordred's loyalties lie?

A: He's torn. He's caught in the middle of Arthur and Morgana. They are two people pulling in opposite directions. And he's the rope in between them. He's like the child of divorced parents.

Q: Why has Merlin been such an international success?

A: The show has been hit all over the world because it provides fantastic escapism. Its origins may be very British, but its appeal is worldwide. Like Game of Thrones, it taps into an audience that loves to lose themselves in another world. People like nothing better than getting away from their own lives by immersing themselves in a fantasy drama.

Q: Why has this particular legend endured for so long?

A: Because it has all the elements required for a great story. It has great battle scenes and a wonderful love story. It's also a family show that has stood the test of time. It is a story that just been waiting for someone to put it on TV. It's a tale that has been dipped in gold!
Posted by DR5WHO at 9:36 AM