A Trip to the Moon - An Extrarordinary Voyage

A Trip to the Moon 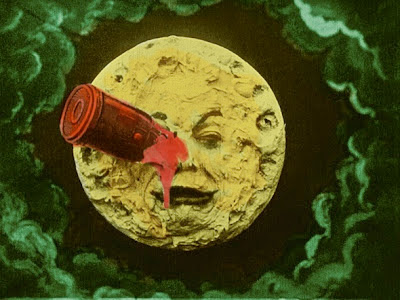 110 years ago filmmaker George Melies made A Trip to the Moon. This 12 minute silent film stands out from all other films of that time period and was one of the first 'hits' for the film industry. Up to that time films were short 2-3 minute pieces of the real world. A train goes by or people walking down a street. George Melies started using film as a way of showing people the fantastic and incredible dreams of fantasy and science fiction. His use of editing and manipulating film was the first example of special effects. Melies brought the ideas of Jules Verne and H.G. Wells to film with A Trip to the Moon. 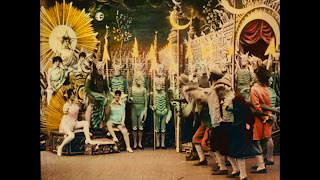 Today, the film is known to many by the iconic imagery of the rocket stuck in the face of the moon. Most people reading this have probably seen or at least heard about this film and know of its importance in film history. The film has a fascinating history leading up to this 2012 release which includes a completely restored and frame by frame colored version of the film. The movie was obviously in black and white but like many films back then, had a hand painted version created. The color version has since vanished and only the B&W version exists, until recently.

A color copy was found but was in horrible condition and after 8 years of restoration, a restored version is now available on Blu-ray.

The film itself is important and incredibly crafted. Knowing its age and the limitations of technology, the film is amazing both visually and in scope of its story. The surreal feel of the film is a result of the mixture of the stage like almost theater performance presentation that all films had at that time and the imagination of Melies. Characters often played inanimate objects and in this case, stars and the moon had faces. The use of painted backdrops, superimposed cinematography and other tricks transformed a studio out in the back yard to another world. These tricks were used again and again in film and are still even today. Melies discovered them and enhanced the techniques. 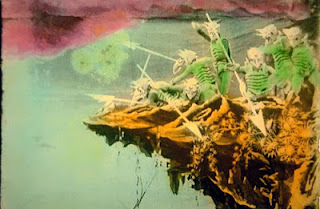 The Blu-ray release has the incredible color version of the film that looks as close to the original color version of the 1902 film as possible. Digital technology was able to marry the B&W prints with the color version and where color version segments were missing, the color was added to the B&W, mimicking the way it was done in 1902. There is a new soundtrack by AIR which is not trying to imitate the old style piano soundtracks that were often played live in the theaters. The soundtrack is different but works really well. The color and restoration is breathtaking.

In addition to the film, there is a documentary that covers not only George Melies career, but the restoration process on the film. This is just amazing and definitely justifies the high price tag of this release. Two more Melies shorts and an interview are also included. 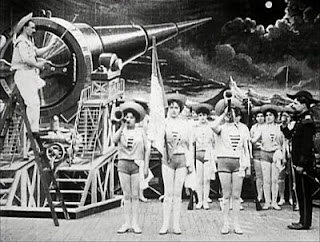 Finally, for those who want to see the film in its original glory, there is a B&W very good version of the film with a piano soundtrack that is more like the originals used at that time. There is also several optional audio tracks including one with the original Melies narration and the other is a soundtrack of voices added to imitate some of the releases in the United States that employed people on stage to add voice-over for the characters. This release is actually hard to find. A limited edition steelbook was released by Flicker Alley in Spring of 2012 but has since sold out and is now a collector's find, going for over $100 on Ebay. A regular Amaray edition is available but is not the easiest to find. The price is high, $34.99. The editions both include a Blu-ray and DVD version.

The release includes a detailed booklet about the making of the film.

I was hesitant about buying this for that much money (I paid $29.99), especially for a 12 minute film but I felt it was worth it.