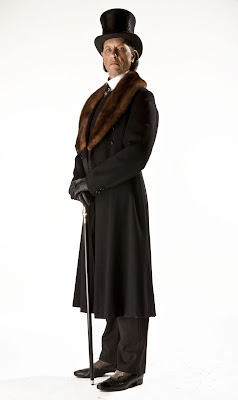 Here is another interview for the Christmas Special this time it's Richard E. Grant talking about being the villain.

Having previously played the Doctor in the 2003 online animated series Scream Of The Shalka and during a Comic Relief spoof some years ago, Richard E Grant returns to Doctor Who, but this time as the villainous Doctor Simeon.

"I have been told that on pain of death I am not allowed to reveal anything about my role in the Christmas Special," explains Richard, "other than that this character has never been in Doctor Who before..."

Returning to Doctor Who for the third time, Richard explains, "I have had two 'brushes' with the Who phenomenon before, playing the Doctor in the cartoon digital version and the Comic Relief spoof some years ago, before the franchise was re-booted with Christopher Eccleston."

Richard is tasked with playing this year’s villain, the mysterious Doctor Simeon, who, with a vendetta to settle from childhood, recruits an army of evil and hungry snowmen to bring together his plan.

So how did Richard enjoy playing the villain? "When you're born with a 10-foot-long face, you don't get hero roles, but I'm not complaining, as I have hugely enjoyed the wide variety of parts I've got to play."

Growing up in Swaziland, Richard has had to devote time to catching up on the British institution, he explains: "Having grown up in a country without TV, I missed seeing Doctor Who through my childhood, but I have made up for lost time since with box sets."

As the Doctor battles to defeat Doctor Simeon and his army, Richard shared many scenes with Matt Smith - so what did he make of working Matt? "I have really admired Matt from when I first saw him in a play called That Face at the Royal Court Theatre some years ago," says Richard, "and have keenly followed his career progress. He is the perfect fit for Doctor Who. His interpretation is very kinetic and fast-talking."

So will Richard be watching this Christmas? "I love Christmas and everything about it. I will be at home and watching TV after lunch, hoping I can stay awake after the feast!"

Email ThisBlogThis!Share to TwitterShare to FacebookShare to Pinterest
Labels: 2012 Christmas Special, doctor who, Doctor Who - The Snowmen, Richard E. Grant, The Snowmen