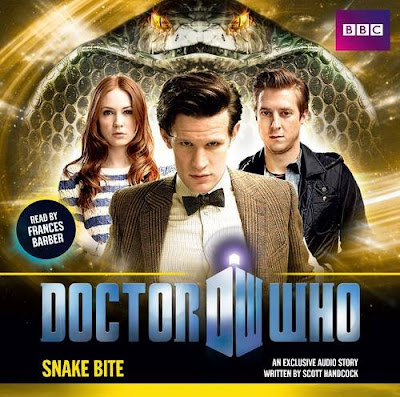 AudioGo's newest release in 11th Doctor Audio Books out now is Snake Bite. It is read by Frances Barber who played Madame Kovarian.  It is out now and can be purchased at this link.
http://www.audiogo.com/us/doctor-who-snake-bite-11th-doctor-audio-original-scott-handcock-gid-61695

Doctor Elehri Mussurana has spent a lifetime on her work. She's guarded her pet project close to her chest, letting only one person share her secret - her husband and lab partner Ernst Wharner. As their experiment reaches its final, glorious fruition, they watch in awe as sparks fly in a sealed chamber and specks of sapphire light begin to join together into a shining haze. A wormhole in time and space is being created...But then something unexpected appears inside the swirling vortex: a tall blue box with the words 'POLICE PUBLIC CALL BOX' on the side. The TARDIS has arrived in the far future, in a scientific research facility - just as reality is ripped at the seams and the universe tears in two...Written specially for audio by Scott Handcock, Snake Bite features the Doctor, Amy and Rory as played by Matt Smith, Karen Gillan and Arthur Darvill in the acclaimed BBC TV series. It is read by Frances Barber, who played Madame Kovarian.