The Hobbit: An Unexpected Journey Review ( Mild Spoilers My Precious) 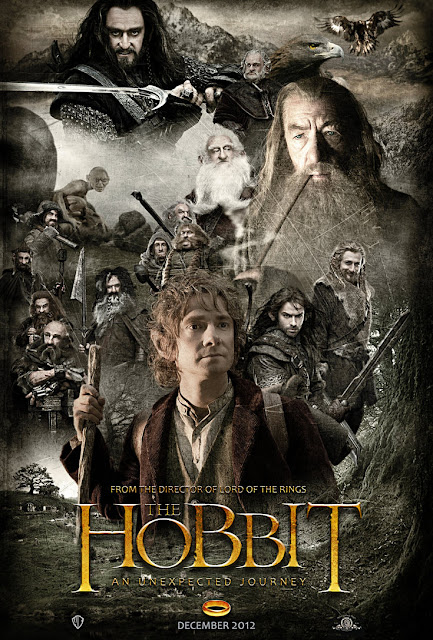 Every story has a beginning and until now The Lord of the Rings can say they have their beginning or in the very least the groundwork for that trilogy.   The Hobbit was our first foray into Middle Earth and introduced us to Gandalf, Gollum, dwarves, elves and of course the one who finds the ring the Hobbit Bilbo Baggins.

This classic book has finally made it to the big screen after a lot of studio bickering over the rights and bs like that.  Peter Jackson has once again taken us back to middle earth and Hobbiton to tell us a tale of dragons and dwarves looking to get their home back.  We meet some familiar faces along the way and of course there are Orcs to fight.  So was this new voyage back to our realm of fantasy just as good as we remember it from the Rings trilogy.  Well like I said every story has a beginning and, well, this story starts off on the right foot. 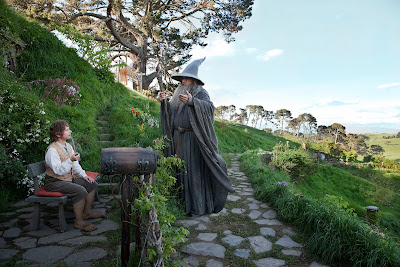 The story starts off with old Bilbo, played once again by Ian Holm, getting ready to write his memoirs down.  He recalls how it all happened when Smaug arrived and took over the Dwarves Mountain home. He is writing this all down for Frodo. Who we also see since this is taking place before Bilbo’s birthday.  I liked how they used this scene to link the two movies together.  It gave us something familiar to link to and helped to bring us up to date on what The Hobbits main plot is about. 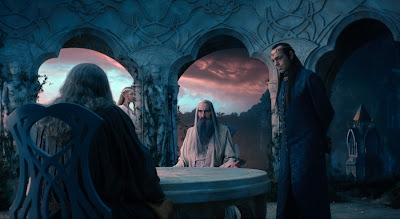 With that said I have to say I overall enjoyed the movie even though the pace was a little dragged.  Thought it could have moved along at a brisker pace.  But when you are trying to draw out a 250 page book to make 3 movies well I guess you’re going take your time.   With that said I really did not have many problems with the movie at all.  Well I shouldn’t say that there were a few things I did not like but that is mainly book verse movie and what wasn’t true to it. For one was the Goblin King’s appearance which I had always pictured him to being a big, scary and fierce creature not the comical caricature he turned out to be.  I wasn’t too keen on seeing Elron, Galadriel and Saruman in Riverdale.  Yeah that didn’t happen but you know what it did actually fit in well with the movie and did link a gap to the Rings trilogy. 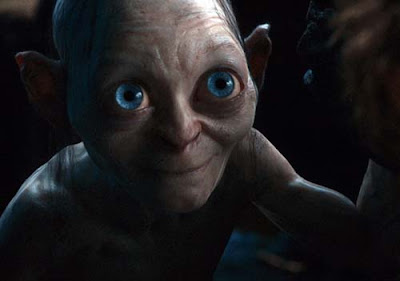 Radagast The Brown played by 7th Doctor himself Sylvester McCoy made the most of his one sentence in the book into a full fledge supporting cast member.  I really did like the way they expanded his character.  He was mentioned in the book but it was good to see him do something.  Sylvester McCoy really did a magnificent job playing Radagast.   Actually I didn’t mind this as they used Radagast The Brown to bridge another gap to introducer the Necromancer, or Sauron as he is later known as, into the story.  You see his story will be later and I did like how they used his character to find the evidence of his return. 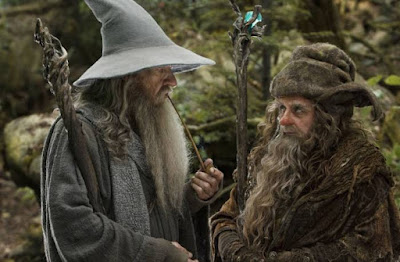 The Hobbit had all the charm and action of the previous movies which you would expect coming from Peter Jackson.  In fact there was quite a bit of action that was really well done and would have the purest sword enthusiast grinning from ear to ear. But the problem here is once the action gets going.  Unlike the other films The Hobbit is a slower pace story and most of the action takes place later on.  But do not threat once it gets going hold on. 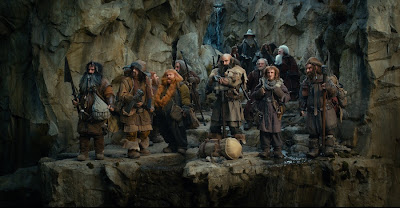 I saw this movie in good old fashioned 2D and from what I have been hearing it seems to be the way to see it as there have been negative comments about the 3D and the 48 frames per second.  I thought the 2D version looked great.  From all the scenery that was shown and all the action sequences it seemed really easy on the eyes and didn’t seem like it would have much 3D aspect to it to warrant the extra money to pay for it.

I really enjoyed The Hobbit.  It was a fun romp through Middle Earth and the highlight was the riddle challenge between Gollum and Bilbo.  It was pretty well done and one of the highlights of the movie for me.  After reading it was one of the scenes I wanted to see and I wasn’t disappointed.  I also like the characterization of the dwarves.  I thought they were handled really well and were the comic relief of the movie.  Thorin was captured perfectly and Richard Armitage did a marvelous job as Thorin.  One of the best scenes is the scenes between Thorin and Bilbo where they come to an understanding and tell each other how they feel.  So The Hobbit is a must see movie and a great addition to Peter Jackson’s Middle Earth saga and a movie I will see again.