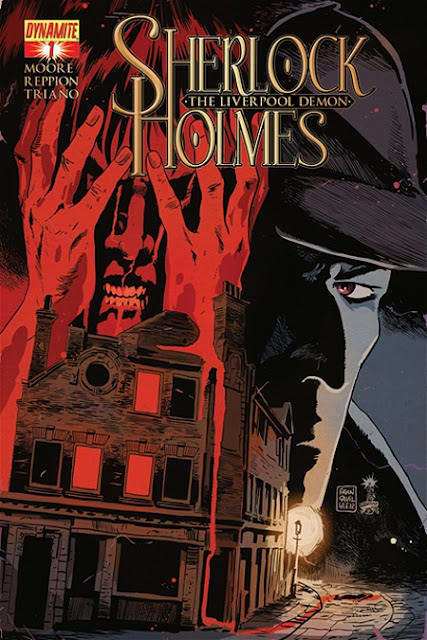 Sherlock Holmes is back and this time he and Watson are in Liverpool finishing up on a case about identity theft and murder.  Upon finishing that up they are invited to dinner by one of Watson’s old colleagues Daniel Denby and his associates.  There he is listening intently to the group’s plans to build an above ground train system for Liverpool when all of a sudden the waiter faints.  Watson and Holmes rush to him and notice he fainted after looking out the window.  The duo run out of the restaurant and hurry to a mob scene where they appear to be looking at something scaling a building. It was something that resembles a demon which the locals call Spring Heeled Jack.

Leigh Moore and John Reppion return to the world of Sherlock Holmes after three years.  I loved their first foray The Trial of Sherlock Holmes which was really good and a must read for any Holmes enthusiast as it captured the way Doyle had written him.  With that said we now have their second helping and a good thing too as the last Sherlock Holmes Dynamite did, Year One, was god awful. 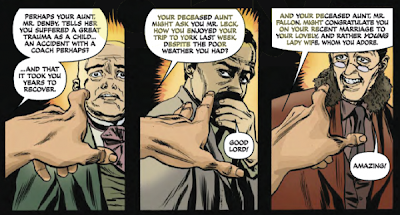 Issue one starts off pretty fast with the first case being completed at the beginning.  The story is set up really well and I look forward to seeing where it all goes in the next four issues. I like the slow pace it takes to get things in motion.  Similar to how Doyle would do it for his short stories.  The demon aspect is intriguing as I’m not a big fan of that type of stuff in Sherlock Holmes but so far I am enjoying the prospect of it.  So with an enjoyable first issue and the table is set for the next issue The Liverpool Demon should be picked up by Sherlock Holmes fans as Moore and Reppion sure know how to write for the detective and his trusted ally.  Looking forward to seeing where this story will go with the second issue next month.