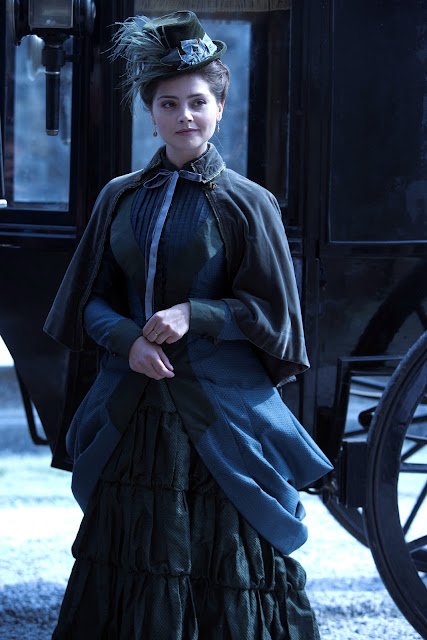 The last two interviews to support the Doctor Who Christmas Special consists of the new TARDIS crew. First up is Jenna - Louise Coleman talking about being the companion.
Source BBC Media Centre


Having made a surprise appearance in the series opener Asylum of the Daleks in September, fans have already met the new companion... or have they? Here, Jenna-Louise gives a little bit of insight in to the character she plays in the festive episode and what we can expect from Clara.

﻿"She is from the Victorian era and a mysterious one," explains Jenna. "Very down to earth, but feisty and curious too with numerous jobs," she continues, revealing more about new girl Clara.

Set in Victorian England, we first catch a glimpse of Clara as a barmaid in the ‘Rose and Crown’ pub, but after meeting the intriguing Doctor, she soon sets about following him, because as Jenna explains, "He has the answers to her questions." With his self-imposed solitude, the Doctor appears uninterested, but eventually gets drawn in as an army of evil snowmen cover London and it becomes apparent that Christmas and the world are at risk.

With Matt Smith revealing that she is a very different to Amy Pond, how does Jenna explain the dynamic of the relationship between the Doctor and Clara, following the loss of the Ponds in the epic mid-series finale The Angels Take Manhattan? "She isn’t intimidated by the Doctor," says Jenna. "Instead, she finds him amazing and ridiculous. But she is on her own mission and lives by her own means. She is very resourceful."

As well as a barmaid, Clara adopts the role of governess to two children in Darkover House, where something sinister is lurking in their garden and whose last governess hasn’t yet left the premises...

After being selected for the coveted role of companion, Jenna started filming in BBC Cymru Wales’ Roath Lock studios earlier this year and made her first appearance in series seven opener Asylum Of The Daleks. So how has she found the job so far? "Everyday is really surprising," she explains. "For the last two years, I have mainly been doing period dramas, so to be thrown into this world with loads of CGI is very different. Whole new sets are built in the space of a couple of weeks. For this episode, we had snow machines and it does make you feel like a big kid!"

Stepping into Karen Gillan’s shoes, who played Amy Pond, did Jenna receive any advice? "Karen has been great," explains Jenna. "She has texted me advice on Cardiff, like where to eat. And Matt always has an ear out for me."

Unlike the Doctor in this festive episode, Jenna isn’t a Christmas grump: "I love Christmas and will probably be sitting down with the family to watch this adventure on Christmas day! It is one of the shows that can do Christmas properly and this is a proper Christmas treat."

Email ThisBlogThis!Share to TwitterShare to FacebookShare to Pinterest
Labels: 2012 Christmas Special, doctor who, Doctor Who - The Snowmen, Jenna-Louise Coleman, The Snowmen