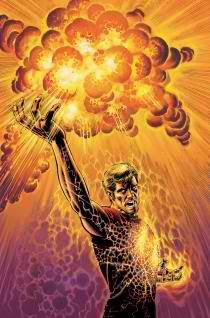 DC Comics Human Bomb #1 by Justin Gray and Jimmie Palmiotti.
Issue starts off with Mike Taylor a former Marine in his dress uniform getting the Medal of Honor from the President and with his mom in the audience.  This is a recurring nightmare as he then starts to glow and the dream ends with a wing of the White house being blown up. Today he's a construction worker and today New York is blowing up everywhere. Then he sees one of his old unit buddies in a trance and not saying anything. So he tackles him to the ground and rips his jacket off to see the mans chest marked C.R.O.W..N and he blows up and Michael absorbs the energy. Then the story goes back to Michaels flashbacks where  he is back in the war getting captured by a army unit in black and wearing gas masks. The flashbacks is what explains his origin with the energy. Then he wakes up and is being pursued by the government and he is also fighting superhuman suicide bombers.
By Rob Nelson