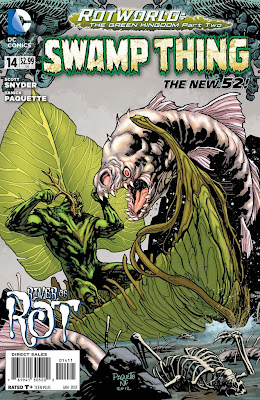 Scott Snyder announced yesterday that he and artist Yanick Paquette will be leaving Swamp Thing with issue 18.  This was a planned departure and not really a big surprise as Scott Snyder work load has gotten bigger with a new Superman book coming out and his duties on Batman and American Vampire among other projects coming up. Here is his announcement:


"To be 100% clear: [Paquette] and I have been planning this ending -- both an ending for us as creators on the book, and for the storyline we started way back in issue #1 -- for a long time," Snyder wrote this afternoon on Twitter. "Even before we signed on to do Swampy, we both knew it would be a limited run, as we had other projects in the pipeline we knew would eventually come to pass. But the chance to do 'Swamp Thing,' to bring back a character we've both loved dearly since childhood, was just too thrilling to turn down."

"That said, we both ended up staying longer than we'd planned, too, out of love of the character, love for the story we were getting to tell, love for our team, and above all, out of love and gratitude for you guys, the fans who've helped us do something here that many people said was impossible -- make 'Swamp Thing' a viable book in the DCU. For that, all of us on team Swampy will be forever grateful to you guys."