AudiGo Releases Destiny of The Doctor For The 50th Anniversary 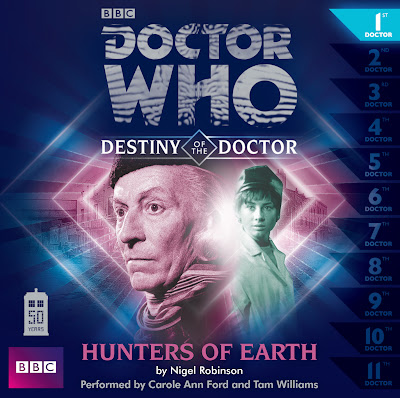 Here is a cool idea.  AudioGo will be releasing an Eleven Part story Titled Destiny of The Doctor and the first part will be out in January, the 3rd of January in the UK,  and will run every month up to November.  All The Doctor's will be represented and each story will have a special star from that Doctor's era performing in the story.  Here is the full details.


Eleven Doctors, Eleven Months
The series will begin in January with the First Doctor – as played by William Hartnell in the original TV series – and progress through all his TV incarnations to date, culminating in the Eleventh Doctor – as played by Matt Smith – in the anniversary month, November. Performers for the stories will be announced in the coming months, with some very familiar Doctor Who names expected to be in the line-up. The series is produced for AudioGO by Big Finish Productions.

First story announced The first story is Hunters of Earth (Destiny of the Doctor 1) by Nigel Robinson. Set in Shoreditch, London in 1963, it features the First Doctor and his granddaughter Susan prior to their departure from Earth at the beginning of the first ever TV story. It’s performed by Carole Ann Ford and Tam Williams, with sound design by Simon Hunt.

Email ThisBlogThis!Share to TwitterShare to FacebookShare to Pinterest
Labels: AudioGo, Destiny of The Doctor, Doctor Who 50th Anniversary