Steven Moffat Dishes On The Remainder Of Series 7 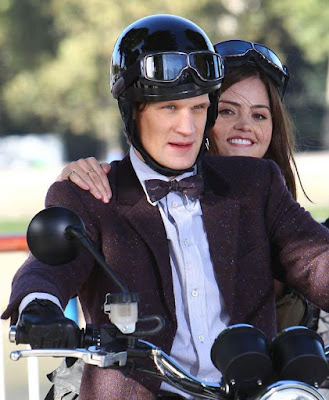 Digital Spy has an interesting article up in which Steven Moffat discusses the upcoming stories for the rest of series 7 of Doctor Who.  He doesn't give much away but it does give us a better idea what is coming when the show returns in April.


Having covered prehistoric adventure, western and noir in the first half of the series, which genres are left for episodes seven to fourteen? A "modern urban thriller", a "base-under-siege story", "a fantastic alien planet, which is looking absolutely amazing", and "a cracking ghost story", says Moffat.

There's also going to be a “Journey To The Centre Of The TARDIS”, with more of the TARDIS than you’ve ever seen before." As well as “Diana Rigg and junior Diana Rigg in an absolutely mental story by Mark Gatiss – all period drama will pale next to this monstrosity of nonsense! It’s absolutely glorious. You’ll watch other period dramas and say ‘When are they going to do the scary bit?’

“We’ve got Neil Gaiman doing the Cybermen – part of the impulse there was to say “Have we fully exploited the creepy factor of the Cybermen yet?” I thought Neil would be a good match for that.

“And then there’s the finale, which has got some serious fanboy-pleasing going on in it. My aim for it – which I’m about to humiliate myself at the tone meeting by saying – is to have slightly more than you think could possibly happen in one episode. Slightly more treats than you think you could be allowed…”