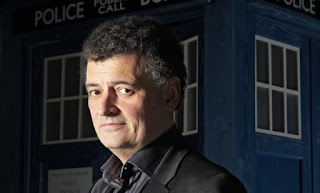 Over at Digital Spy they have been very busy talking with Steven Moffat on December 19th when The Snowmen had a screening.  They got him to comment on the new TARDIS interior and the 50th Anniversary.

"I thought we'd been getting progressively whimsical with the interior of the TARDIS,"

"I started to think, 'Well, why is that? It's not a magical place. It's actually a machine'. And actually potentially, as you'll see more spectacularly later, quite a scary place sometimes. We make a lot of use of that."

"They are immense, they are considerable," he promised. "[The episodes] will be full of tremendous surprises. But they wouldn't be surprises if I accidentally said them now, would they?

"But I promise you, we're going to take over television. Trust me."