The Hobbit-An Unexpected Journey - A Review by Marie Parsons (@mAntoniaP) 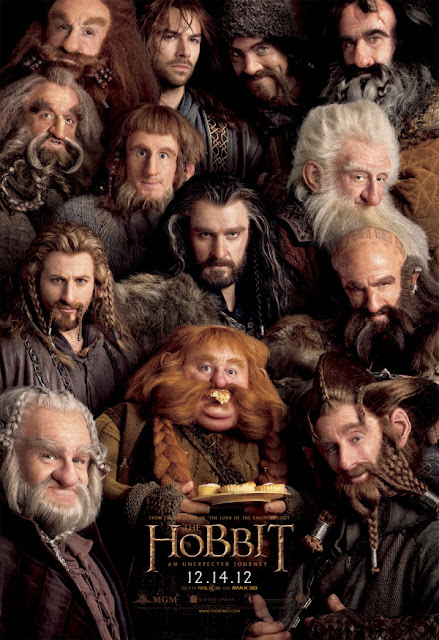 The Hobbit-An Unexpected Journey
A Review by Marie Parsons (@mAntoniaP)

I would run out that door with the younger Bilbo Baggins, off on an adventure, any day. While the first of the three intended Hobbit movies did occasionally make me scratch my head in places, overall, I loved it.

Ever since hearing that The Hobbit story would become a movie, I have been wildly anticipating its film release. I love Lord of the Rings, both books and movies (and shamelessly admit to watching the Extended Versions of all three countless times.) This only means I am a happy Tolkien fan-not that I don’t acknowledge weaknesses and have a few moments of “why did they do that?”

Yes, I had a few of those moments when I watched The Hobbit earlier this week (in an advance screening).  I had heard many criticisms, and was willing, and prepared, to be disappointed and perhaps even unhappy.  I watched to the end of the credits basking in joy, having the music run through my head, and willing to overlook the weaker elements. Let’s sort through those weaker elements first. They do disappoint me—just not enough to be displeased. 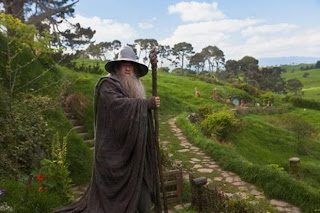 First, the movie did not need to be 3D. There were no flying arrows or body parts leaping out of the screen. The 3D technology may intend to provide a depth that the movie screen cannot. But the scope of the landscape (and the added CGI terrains and architecture) satisfied me tremendously.

Second, there were moments when the camera moved a bit too much during action scenes, and even when it captured scenes from directly overhead. That was all too distracting.

Third, a couple of the extra characters were---nearly caricatures, and that disappointed. The Great Goblin, or Goblin King, is described in the book as “a tremendous goblin with a huge head.”  So having a fiercely oversized goblin would have been sufficient for the purpose. As the character was CGI’d he was almost ludicrous. Compared with the menacing evil of Azog, who quietly pursues the dwarven band, the Goblin King is too comical. His jowls are far too long and it was difficult to take him seriously at all as a terrible horror. But more sadly, and I say this with heavy heart—the character of Radagast was played far too much like a clown. I think the world of Sylvester McCoy, and I had eagerly anticipated Radagast’s appearance at last, since he was omitted from the Lord of the Rings. I give Mr. McCoy kudos—the character as played was marvelous, whimsically magical in a “nature-kin” way. But the sense of Radagast being a wizard rather equal to Gandalf, which in truth he had to have been, was lost in the comicalness. I wanted, not less gentleness, but more—power. Even Gandalf must deal with the perception of being a purveyor of fireworks but yet a wielder of great magic. Radagast—was more of a magician in the silly sense, rather than demonstrating his truer power. That being said, I am very glad he appeared.  Tolkien let him get by with a narrative mention only, early in The Fellowship of the Ring, and Radagast was always a crucial albeit side-bar to the investigation into Dol Guldur and the Necromancer. 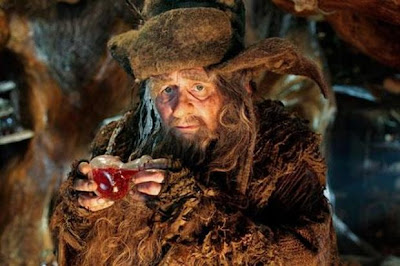 Fourth, it pains to say this, because I do adore Ian Holm, but I think the setting of the Hobbit, all that necessary background of the dwarves losing their realm to the Dragon Smaug, could have been accomplished with a simple voiceover. The backstory could stay—what better way to introduce the final battle everyone knows is coming, than to show how the dwarves lost their home (and we had some similar backstory in Lord of the Rings with the death of Isildur). But the little scenes with Frodo and the older Bilbo—really? No.

Putting those four objections aside—the movie was fantastic. Once again, the scope of the fictional Middle-Earth was breathtakingly displayed.  From hill, to swamp, to forest and more besides, and climbing down the cliffside path to view Rivendell for the first time was a magical scene (even knowing Rivendell was CGI).

We see more of the Dwarven mentality here (where perhaps Lord of the Rings showed more about Men and possibly Elves).  Most of all, this first movie brings us character changes in Thorin Oakinshield, King of the dwarves, and in Bilbo himself.  Two particular scenes made me tear up a bit. In one scene, Bilbo tells the dwarves that while he does think of Bag End and his home, he has come to understand that the dwarves don’t have a home, and he quietly promises to help them get it back.  At the start of the adventure, Bilbo was unsure of his place in the band, why he had even set out, what was he thinking. He had never used a sword, never fought or killed anything. Some of the dwarves, especially the overly proud and haughty Thorin, agree that he does not belong there and he will only be in the way. But then it is Bilbo who manages to save Thorin’s life, and brings about a softening in the dwarf.

Much has been made of the expansion of the Hobbit story. Perhaps if this movie had been made first, that would matter.  But everyone now does, or should, know that the Gold Ring found by Bilbo in the caverns is really a *very special ring*, and one has got to suspect that Gandalf knew something about it. Well, maybe Gandalf in the original stories did, or did not. In The Hobbit movie, there is interplay between Gandalf and Galadriel that hints that the two of them at least know something is going on. That makes complete sense within the context of the larger story. Galadriel is the only Elf who had ever lived in the Blessed Lands, and Gandalf has long had dealings with the Maiar. I don’t mind that at all (and Galadriel is such a marvelous being.)

I would see the Hobbit again some-time, and probably will before the next movie comes out. If you don’t agree, try reading the Hobbit out loud, and imagine it visually. Sometimes text-to-screen requires and demands embellishment.  Even the simplicity of the Hobbit story takes place within a wider, larger world, whose time stretches back into the mists of legend (Morgoth? Beren? The Valar?)
The Hobbit movie is a reminder that its inspirational book contains far more magic and wonder than the sweet simple tale of a-hobbit-living-in-a-hole-in-the-ground-but-runs-out-on-an-adventure. Watch it in that spirit.