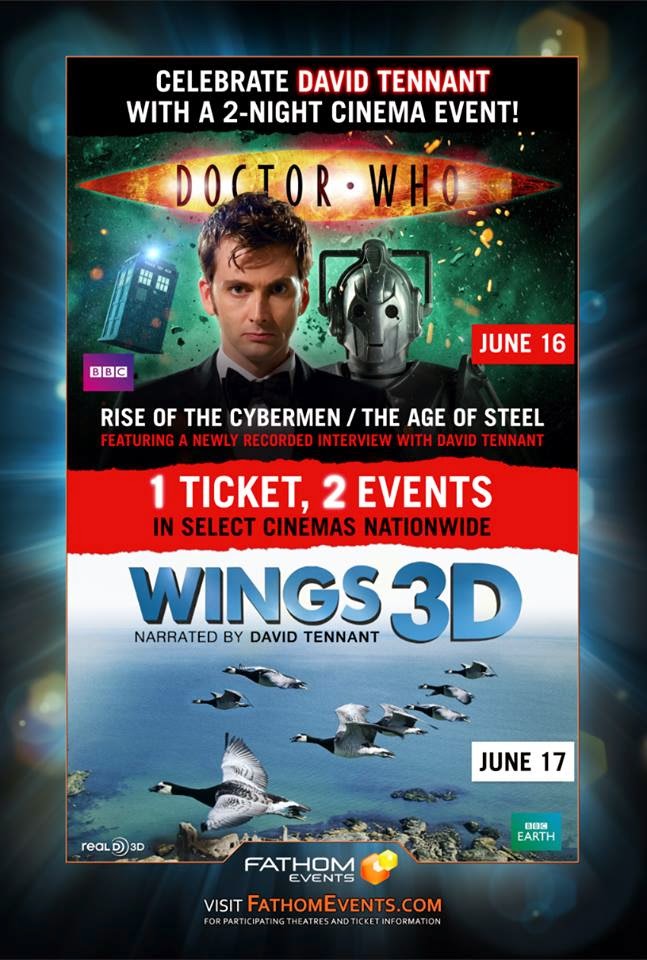 BBC Worldwide and Fathom Events Celebrate David Tennant by bringing Doctor Who and the premiere of BBC Earth’s Wings 3D to the big screen.

One Ticket for a Two-Night Cinema Event featuring “Doctor Who: Rise of the Cybermen/The Age of Steel” on June 16 followed by “Wings 3D” on June 17

Centennial, Colo. – May 14, 2014 - BBC Worldwide North America and Fathom Events announce the celebration of Emmy® Award-winning actor David Tennant (“Broadchurch,” “Fright Night”) in a two-night special theatrical screening event all for the price of one ticket. See David Tennant on the big screen as the Tenth Doctor in the epic two-part Doctor Who story “Rise of the Cybermen/The Age of Steel” on June 16 at 7:30 p.m. local time with never-before-seen bonus content from Tennant himself. The next night, experience the earth from a bird’s eye view in “Wings 3D” narrated by David Tennant on June 17 at 7:30 p.m. local time in RealD™ 3D.

Tickets for “Doctor Who Cybermen + Wings 3D” are available at participating theater box offices and online at www.FathomEvents.com to the public beginning May 15. The event will be presented in 620 select movie theaters around the country through Fathom’s Digital Broadcast Network. For a complete list of theater locations and prices, visit the Fathom Events website (theaters and participants are subject to change).

In this special theatrical cut of “Doctor Who: Rise of the Cybermen/The Age of Steel,” the TARDIS is trapped on a parallel Earth and Rose discovers her father is still alive. But sinister forces are at work as John Lumic prepares British society for the Ultimate Upgrade reawakening an old enemy. Can the Doctor and Rose save the people from conversion or will they face deletion at the hands of the Cybermen?

These episodes mark the first appearance of the Cybermen in the relaunched series of Doctor Who bringing a brand new look to the Doctor's terrifying adversaries. Doctor Who is BBC AMERICA’s highest rated series and celebrated its 50th Anniversary last year.

Next, from Emmy® Award-nominated director John Downer comes the theatrical event “Wings 3D,” a groundbreaking aerial adventure. This feature-length RealD™ 3D experience was filmed with revolutionary aerial devices and techniques to fly right alongside birds. This breathtaking journey will take viewers across the world's most iconic landscapes to the heart of the greatest animal spectacles on Earth: snow geese dash through Monument Valley and New York City, vultures ascend miles above the earth then dive down to huge wildebeest herds below, scarlet macaws race at breakneck speed through the rainforest. Using unique, state-of-the-art 3D cameras in barely accessible and highly dangerous places, the audience has never before been so close to the drama and beauty of nature until now.

Soumya Sriraman, EVP of Licensing and Home Entertainment for BBC Worldwide North America, says “Once again we are bringing Doctor Who to theaters to give fans a new way to experience the Tenth Doctor – David Tennant, and we are making it extra special with a two-night theatrical event for Tennant fans across the country. From the finest in science fiction to the best of natural history, there will be something for everyone to enjoy- all on the same ticket.”

“Fans of all types come out in full force to experience the infamous Doctor Who in our cinema events,” said Dan Diamond, senior vice president of Fathom Events. “We’re sure that this special two-night event featuring the incomparable David Tennant will offer them a unique opportunity they won’t want to miss.”
Posted by DR5WHO at 9:13 PM

Email ThisBlogThis!Share to TwitterShare to FacebookShare to Pinterest
Labels: David Tennant, doctor who, Rise of the Cybermen/Age of Steel