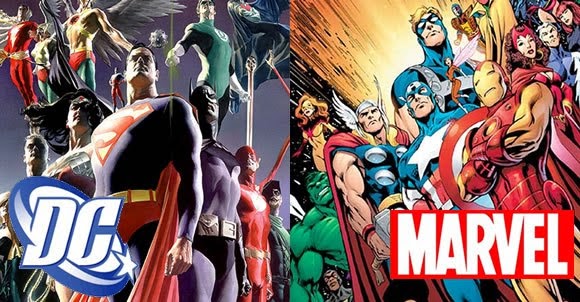 I’ve been a fan of comic books since the late 70’s early 80’s, well; let’s just say it’s been a long time.  I have enjoyed reading the heroes of DC and Marvel every week once I pick up the new books on Wednesday when they arrive at the stores or now when they arrive at my doorstep.   Yes even that speed bump that was the 90’s when the books where short on story and big on flash.  Remember the gimmick covers that came out once a month to boost the sales of books that had a weak storyline.  I do but yet I continued to buy them and continued on into the next century reading and enjoying the various super hero comic books the Big Two released every week.

But lately I have not been too enamored with the books that the Big Two Marvel and DC have been putting out lately.   In fact this has been something that had been bothering me for the past year.  I wasn’t enjoying the stories that was being published and thought that for a long time the storylines have been weak and uninspiring.  Now this is my opinion and some of you may disagree with me but I’m sure there are those who will agree with me and feel exactly the same way as me.  To be fair to Marvel and DC their market now is to have storylines last 6 to 8 issues so they can be sold in a collected form in hardcover and paperback.  It seems the big money maker is buying the collected editions and you can’t blame DC and Marvel for going this route as they are in the business of making money.  But is it worth hampering the storytelling?  Is it worth having really long and drawn out stories that hurt the monthly comic books?

In my opinion the answer is no because it is making the monthly book unenjoyable and not worth reading.  I have dropped a lot of the super hero books that I used to read because the storytelling has been pretty bad.  A lot has to do with what the publishers are allowing the writers to do with the characters.  Superman’s books have been unreadable lately and since the new 52 debuted he has been one of the main characters that just haven’t clicked.  A lot of his stories have suffered from being drawn out to long and just filled with a lot of filler and junk I really don’t want to see in Superman like really science driven stories.  What?  Can we just have Superman fight bad guys and find a clever way to defeat them without the entire techie mumble jumble that you need a science degree from Harvard to figure out.

The same can be said for Marvels Avengers books.  The books have been filled with so much cosmic and science that it is incredibly boring to read.  The book is filled with so much dialog to explain the tech stuff that you lose interest in the overall story that seems to be a very long and tedious story in the first place where there seems to be no end in sight.  Like with Superman I would like to see The Avengers take on the bad guys have a big fight and save the day.  You can still have stories that you can fill a collected edition just make them fun and interesting again.

To be fair I do enjoy Marvel’s Hawkeye book as it is original and fresh and is filled with funny and action pack storylines.  This book is what a comic book should be like.  Matt Fraction has done a great job with Hawkeye and gotten away from the complicated storylines and has made reading comics fun again.  I’m also enjoying DC’s Batman books.  For some reason the Batman group of writers seem to have kept the stories easy to follow and just have Batman going after the baddies and beating them up and saving the day.  Pure and simple and nothing complicated.  This is what makes a book enjoyable.

So while I have been mad at DC and Marvel I have been checking out books by the smaller and independent publishers.  I am thoroughly enjoying the books from Valiant Comics.  Really love the Valiant Universe, Archer and Armstrong is my favorite it is a great read, and I am glad they brought back the characters from the 90’s and gave them a fresh take while being true to the original concept.  Smart storytelling and storylines that is not too long or complicated to enjoy.  Plus there’s plenty of action.  The books have plenty of action especially Bloodshot which may just be one giant book of, well, lots of action and gun fights.  I’m also enjoying the books from Image Comics like Velvet, Lazarus and Rocket Girl.  These books are written well and still the storylines are not long and usually wrap up in 4 issues. Plus they are something different from what I'm used to and have helped me expand my comic book reading while I slim down the super hero books.

The thing I am finding is while I’m frustrated in the super hero books I have been finding solace in the non super hero books.  I’m also looking to the past and reading Neil Gaiman’s Sandman series.  Yes I am taking this lull in quality to explore other comic book avenues and I am finding some really cool books to read.  Lots of stuff I may have neglected while reading the super hero stuff but now I’m giving it a try and am really enjoying what I would not give a second look to a few years ago.  While I’m not happy in the direction of the books Marvel and DC are putting out, Dick Grayson as a James Bond type character what the hell, I’ll still read a few of them and hope they get out of the rut they are in and I will still explore the independent market as there seems to be more interesting books in that medium.