Doctor Who - The King of Sontar Review (Mild Spoilers) 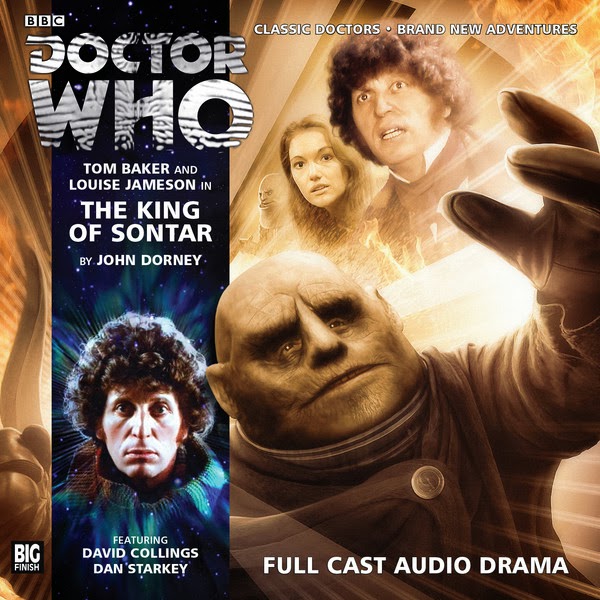 The TARDIS has been manipulated by the Time Lords to take The Doctor and Leela to a place they had not planned on going to Dowcra base.  A base that earlier an Elite Sonataran Assignation Squad was defeated in trying to kill General Strang the greatest Sontaran in history.

The Doctor wonders why the Sontarans would want to kill one of their own.  Especially since he does not wear any battle armor and is on a planet that is out of the way.  It appears that Strang is on the verge of having a terrible time travel device created for him by his scientist Rosato.  This could have devastating repercussions on the universe and it now becomes clear why the Time Lords diverted his TARDIS.

The King of Sontar is the first story in the third series of Tom Baker adventures for Big Finish.  Yet again it is a single disc 60 minute in length story and this time Tom Baker is once again joined by Louise Jameson.  Since this story features Sontarans the default Sonataran actor Dan Starkey plays all the Sontaran parts and does his usual great job especially as the Strang who is a lot more forceful and manacle than the normal stupid Sontaran he usually plays.

I had mixed feelings about The King of Sontar.  On one hand it was new Doctor Who with Tom Baker and on the other hand it was a story that was not as strong as what you would expect from Big Finish.  I found myself at times not really caring much about it as you knew what was going to happen in most respects.  You knew that Strang was going to be defeated and that Rosato would come to his senses and try and stop his time tunnel from working.  But the story to get to that part was just not as interesting.

I did like what happened between The Doctor and Leela at the end.  We see The Doctor doubting his decision to allow Leela to travel with him.  He also wonders if she is listening to the lessons he is giving her to be a better person and not warlike.  This was never explored fully in the TV series and it was something I was not expecting.  I hope they continue along with this angle as it could prove interesting.

The King of Sontar while not one of the better stories from Big Finish it did deliver fine performances from Tom Baker and Louise Jameson.  It also gave us a new angle on the relationship between The Doctor and Leela.  Even though I was disappointed with the story it did have its moments and I would not discourage anyone from giving it a listen.