Marvel's Agents of SHIELD Renewed and Joined by Agent Carter

ABC realized that they couldn't let Agents of SHIELD go and renewed it for a second season.  The series was flat in both ratings and stories for much of the season but ever since the Captain America- Winter Soldier connection back in April, the show has been on fire, finally figuring things out.  The series, in my opinion, has gone from a disappointing mediocre show to one of the best on TV right now and the ratings mirrored this.  Men from 18-49 ratings has been the strength for the show and is certainly one of the reasons for the renewal.  One has to imagine that the series story arc will lead right up to Avengers - Age of Ultron.

Meanwhile the Agent Carter series will start as a shorter run series that may air in between the Christmas and winter hiatus of Agents of SHIELD.  The series stars Haley Atwell, reprising her role from the Captain America movie.  Taking place 5 years after Steve Rogers was 'lost' with his battle with the Red Skull, Peggy Carter will no doubt fight against evil and perhaps lay the foundation for SHIELD as mentioned in Captain America - The Winter Soldier. 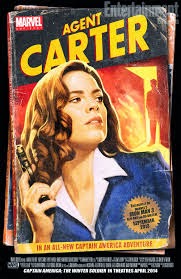