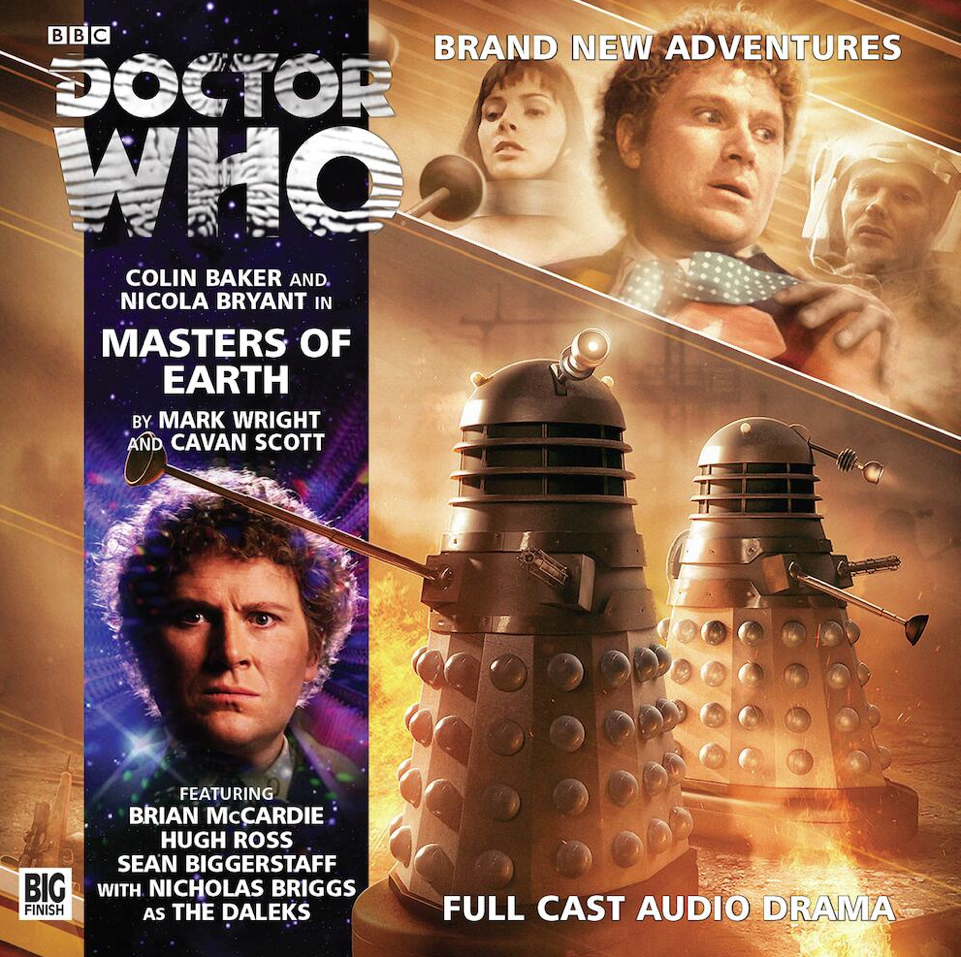 Doctor Who:
Masters of Earth
By Mark Wright and
Cavan Scott

The Doctor and Peri land on Earth in Scotland no less in the year 2163 one year before the First Doctor appears in the events of The Dalek Invasion of Earth.   The Doctor is adamant that they get back to the TARDIS and leave after the help someone from a hanging but it is too late as the Daleks arrive and take Peri as part of the work force.   This is troublesome for The Doctor as he has to be careful not to damage the web of time and prevent the events of his first incarnation to not happen which would harm his own personal timeline. In essence he has to let the Daleks win and let history take its course.

Masters of Earth was a pretty interesting audio story and the moral dilemma that the Doctor was put in.  The Doctor had to be careful not to let on to The Daleks that he knows their history as they do not know who he really is yet.  So The Doctor has to be careful what he says to the people of Earth about the future events of their victory against the Daleks in a year’s time.  It is interesting how the Sixth Doctor goes about this even if he is arrogant enough to play the I know something you don’t card.

What I really liked about this Big Finish audio is that it was a runaway from the Daleks story.  It was a big chase as The Doctor, Peri and Moira are running away from the Daleks.  What were pretty neat were the dangers they had to encounter. From the Vagra plants to the Slither things that you see in The Invasion of Earth story line.  What made the chase even more tense was that Peri got stung by the Vagra plant and was slowly turning into one of them.   The way The Doctor had to help Peri by using his voice and getting her to remember who she is.  It was a dramatic scene that was made perfectly by Colin Baker and Nicola Bryant as they made it really easily to visualize the action going on.  I love when Nicola Bryant is able to do evil Peri voices.  It sounds so evil and freaky coming from her.

Big Finish can be so creative and take more chances with the Daleks that the television series just can’t afford to do.  Like this story Masters of Earth the television series could not do a story like this justice with its limitations.  Big Finish can and does it proper and give us a really good story.  What Big Finish gives us is a story that does have a few surprises and does revisit the Genesis of the Daleks theme of stopping the Daleks but instead doing it for the advance type of Robomen controlled by Moira.  Masters of Earth has a bit of a twist ending that will leave some of the true fans in disbelief but when you think about it it does work.  I was a bit surprised by the ending but I did love it as it was really the only solution The Doctor could do.

I really enjoyed Masters of Earth as it was a different take on the traditional Dalek story and had an interesting premise of happening a year before the events in The Dalek Invasion of Earth.  It had great performances by Colin Baker and Nicola Bryant and everyone involved in the cast.  The story was top notch as it gave the chase story a new dynamic that made listening to Masters of Earth a whole lot of fun.
Grade A