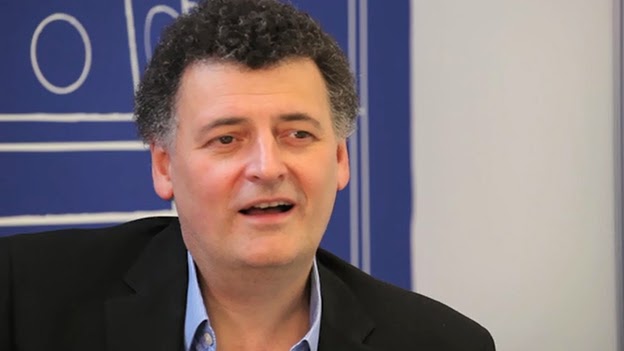 The BBC Media Centre has released some interviews with the key people involved in this years Doctor Who Christmas Special. Today is an interview with Steven Moffat.

What can you tell us about the plot of this year’s Christmas special?

Well obviously as everyone knows from the end of Death In Heaven, it’s the ultimate meeting of Christmas heroes - Santa Claus meets Doctor Who. The buddy movie you’ve always wanted. In addition to that, it’s quite surprising - it won’t be what some people expect because it’s a thriller of an episode. The Christmas element is covered in the fairly notable form of Santa Claus and the elves and their sleigh. But the rest of it is very much Doctor Who – scary, in a polar ice cap base, scientists under threat. I keep describing it as Miracle On 34th Street meets Alien.

Viewers will be thrilled to see the Doctor and Clara brought together again - what can we expect from this and what can you say about what brings them together?

They’re brought together by a crisis that returns the Doctor to Earth to help Clara. The stuff that separated them, the lies they told each other – all of that will be addressed in this episode. We don’t just ignore it for the sake of Christmas. It is properly addressed and forms the emotional core of the episode.

Nick Frost seems an inspired choice for Santa Claus – how did that casting come about?

As ever with Doctor Who we’re very lucky to have Andy Pryor casting for us and he suggested Nick Frost. The moment you think of Nick Frost as Santa Claus you just know he’s exactly right – he has the right style, has the right attitude and more than that he seems like a slightly 'funky' Santa Claus – the sort of Santa Claus that OUGHT to turn up in Doctor Who. Simultaneously he subverts the role of Santa Claus and affirms it very definitively. He’s a truly great Santa. It’s hard to think of anyone else for the role once you’ve seen him.

Will we see the traditional Santa we know and love, or should we expect a different side to him?

Santa Claus will be real, and definitely not evil. Parents shouldn't worry, Santa is presented, as he is in real life, as a great Christmas hero.

How do the Doctor and Clara become involved with Santa Claus?

As was shown in the Children In Need clip, Clara encounters Santa Claus on a rooftop with a crashed sleigh and a couple of grumpy elves. Then the Doctor turns up too.

Did you also have Dan (Starkey) in mind as one of the elves?

Obviously we know Dan really well because he plays Strax, and we’ve been thinking that he should play a part without all the prosthetics on. We needed elves with attitude and real comic timing and Dan is a brilliantly funny actor. So if Dan will forgive me, it’s fair to say he’s the right height, genuinely funny and we just thought he’d be perfect for that role.

How does writing and filming the Christmas special differ from the series?

The Christmas special is an oddity because it’s on its own. As a matter of production, we don’t have episodes either side of it. We just have a few weeks where we shoot that one episode so certain pressures are removed from us – we’re not prepping another show. You should also be slightly aware that there will be more people than usual who don’t usually watch it by virtue of the fact it’s on at Christmas time. It’s become a bit of a Christmas tradition to watch Doctor Who so there will be a number of people who maybe haven’t seen it since the last Christmas special.

What is it about Peter’s Doctor that you think fans are enjoying the most?

What Peter triumphs in is that he is bracing. We’ve been used to a particular kind of Doctor across three very different actors – Chris (Eccleston), David (Tennant) and Matt (Smith). The Doctor has been younger, blokier, slightly more modern, you might say more approachable. We’ve now thrown that into reverse. There are moments with the other three actors where you can see a spiky, scary older man inside him and now we’re seeing more of that man. Peter is bracing – he’s a reminder that the Doctor isn’t your best mate or your big brother; he is in fact a quite scary man from outer space who nonetheless will save your life. He makes you look for the heroism more which I think is exciting - it throws you off balance. It’s almost like going from Pierce Brosnan to Daniel Craig as James Bond. Making the Doctor older has inadvertently made the show feel new again. He’s different and different is good.

The show is now a global phenomenon. How was it this year to see the reactions of fans in different countries?

We’re quite used to seeing Doctor Who launched in the UK and it’s always fun, but essentially people here are used to it. Seeing the extraordinary reactions when we arrived at various airports on the world tour when people were chanting our names and shouting like we mattered was very exciting. We had no idea that it would happen and that people who lived in other parts of the world were so invested in it. The increasing world significance of the show is something that we don’t really see most of the time. We just go to Wales and make our show, we’re not thinking about the people in Rio or America who seem to be hanging on our every word. It’s been great to see how it plays out on the world stage.
Posted by DR5WHO at 7:25 AM