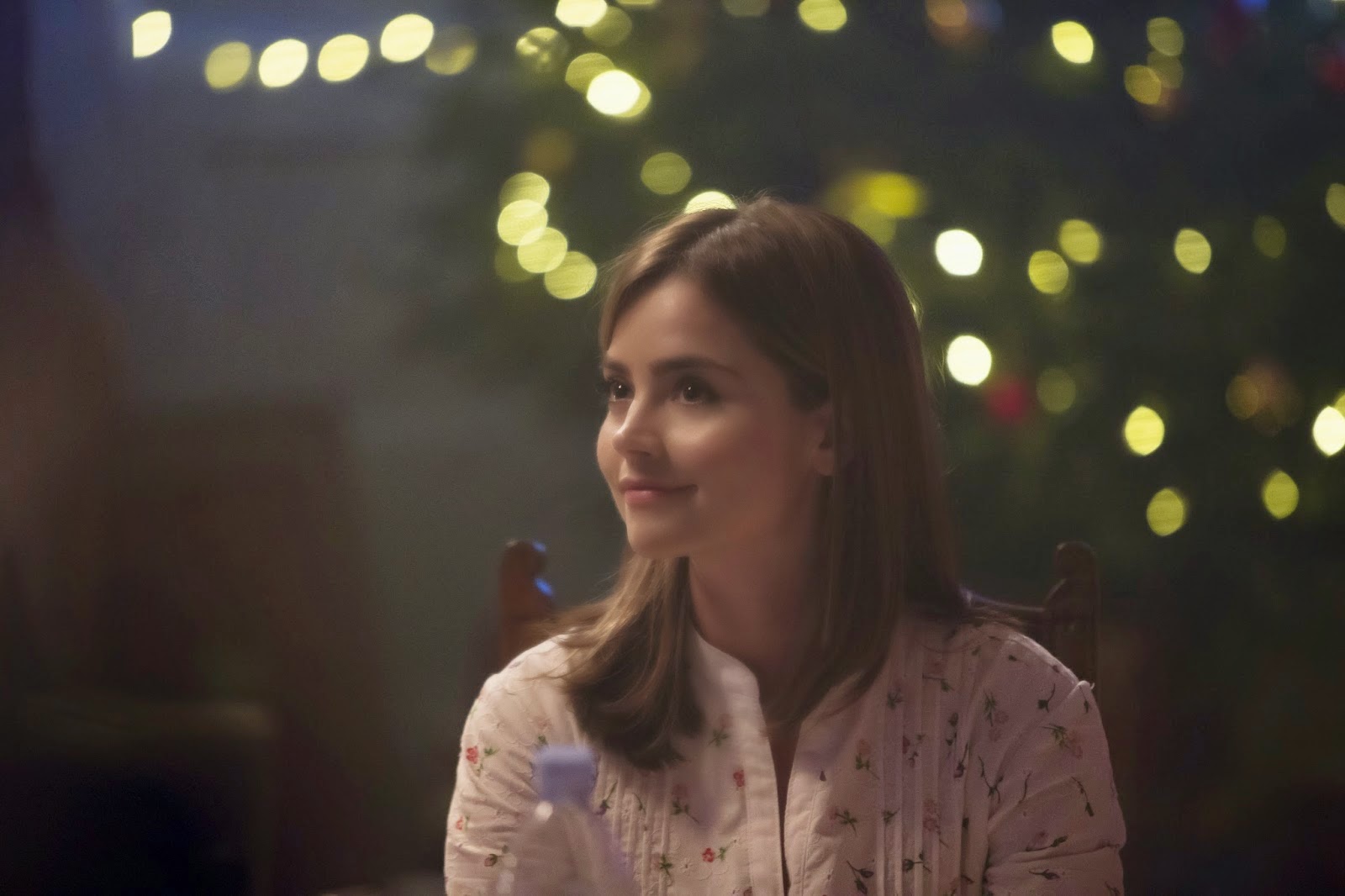 The BBC Media Centre has released some interviews with the key people involved in this years Doctor Who Christmas Special.  Today is an interview with Jenna Coleman

What’s it like for Clara to be reunited with the Doctor in the Christmas Special?

She’s just really glad to be back with him. She’s dealing with the death of Danny Pink but happy to be back in the arms of the TARDIS again, and meeting Santa. A lot of the episode is about telling that adventure, and it’s about the Doctor and Clara resolving what they’ve just been through.

What was it like coming back to film the Christmas Special?

It was good because we’d had the build up to filming the finale, and then Peter and I went off on the World Tour, so we were obviously tired but we were rejuvenated having had a break. We had such a big reaction from around the world and then you get back to filming and back to what feels like your home really. It’s always like that when you’re filming the Christmas Special, and you’re surrounded by tinsel and mince pies and all of that on set every day. Even though it’s October you get a bit of Christmas spirit.

It’s a very Christmassy theme this year. What did you think when you heard there was going to be a real Santa Claus, and played by Nick Frost no less?

Genius. And it’s like Steven (Moffat) said in the read-through - his name is actually ‘Frost’ so it couldn’t be more perfect. Nick really pitches Santa Claus so well between being the Santa as we know him and being very traditional, and then also cutting the act and giving quite a contemporary feel. So it works really well within the context of the episode and he has got the right tone. He’s really nice to have around on set, very funny in between takes and on camera.

You must have had a lot of fun filming the Christmas episode with Nick?

I keep using the word funny to describe Nick but what I mean is he can take anything and make it hilarious. You can give him any line and he’ll just do something with it and I don’t even know how he does it. I’ve never seen Peter (Capaldi) corpse as much as when we were working with Nick. Even in make-up every morning before you get ready to go on set he would have you cracking up.

What does Clara make of Santa Claus?

When she meets him she can’t quite believe he’s there, because bumping into Santa Claus on your roof is quite a weird way to wake up. Deep down she has always wanted to see him, and so when he materialises it’s really a nice thing.

And working with the fabulous elves played by Dan Starkey and Nathan McMullen?

It was like they’d been working together for years. I thought they must have been rehearsing in their trailers because the timing and the double act between the two of them is like they’ve grown up together almost. But they’d only just met!

What can viewers expect from the Christmas special?

It makes you question reality. You can’t quite figure it out. It makes you question what is real and what isn’t, but with a thriller and psychological element. It’s very Doctor Who - it’s got all of the traditional elements as well, and the one sequence we have with the sleigh is so magical. It’s what you want to sit down and watch at Christmas.

With my family eating lots of food, surrounded by grandparents and nieces and lots of good TV, and going for nice big country walks. I really embrace Christmas. I love it.
Posted by DR5WHO at 8:24 AM