Doctor Who - The Bounty of Ceres Review (Mild Spoilers) 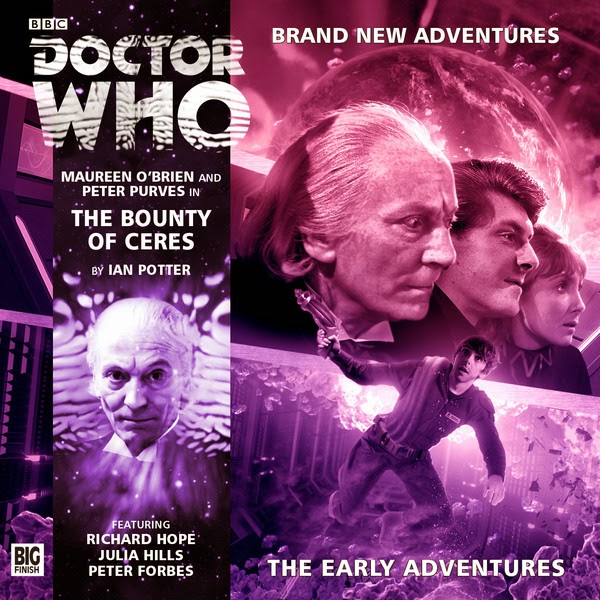 Doctor Who:
The Bounty of Ceres
By Ian Potter

The Doctor, Steven and Vicki have landed on the asteroid Ceres which is between Mars and Jupiter. There they have encountered the crew of the Cobalt Corporation and they are anything but friendly as the end up putting Steven and Vicki in a strange type of cell and put The Doctor in suspended animation.  What makes Ceres a weird place to work is that the conditions outside are deadly but now the conditions inside have become deadly also.  It appears that the maintenance robots have turned against the crew and have started eliminated everyone one by one.  It is up to The Doctor to find a way to stop the robots and find the person responsible.

The Bounty of Ceres is the classic robot trying to kill the humans and take over.  But this time there is a twist as they are being controlled by someone.  The thing is whoever is doing it has programmed the robots to think that the humans are a maintenance fault that needs to be repaired.   I found this to be pretty clever and a different take on the robot takeover story.  I did like the way they did this and it did add a little bit of mystery to it.

For the most part The Bounty of Ceres was entertaining but I did find it to be a bit dull in places.  The getting captured twice did seem to be a bit much as how many times can they get put in a cell for the same thing.  Plus one of the things of The Early Adventures is to have The Doctor disappear from the story but having him in suspended animation and then in a cell was a bit much especially since they were on a small base on an asteroid.  This was minor and did not damper the enjoyment of the story.

The Bounty of Ceres was a story that did have some minor problems for me but not enough to ruin my enjoyment of the story.  Big Finish’s The Early Adventures has so far been a really good series and if you are a fan of the Hartnell era then this is a story for you.
Grade B