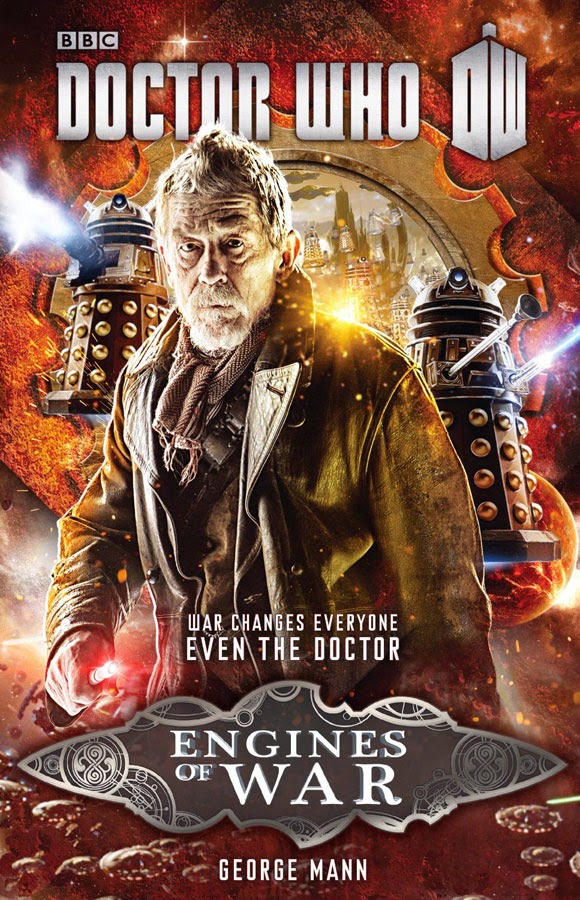 Doctor Who:
Engines of War
By George Mann

The Doctor crashes on the planet Moldox after he witness the decimation of a Time Lord battalion by the Daleks.  There he meets a young freedom fighter named Cinder whose life has been turned upside down by the Daleks.  Together the two weary warriors decide to find out what the Daleks are doing on Moldox and try and find a way to stop them.   What they discover would be catastrophic to the Time Lords and for every race in the universe.  Acknowledging that this is bigger than he can handle The Doctor and Cinder head to Gallifrey where The Doctor discovers that his own people, the Time Lords, are not any better than the Daleks and he discovers that the Time Lords would sacrifice billions of lives to save their own skin.  Now The Doctor has to stop two powerful races and save billions in the process.

The War Doctor gets a BBC Books release with Engines of War and I have to say that I was really curious, excited and interested in reading this book.  Since his introduction in the closing moments of The Name of The Doctor and getting to see him in the 50th Anniversary story The Day of The Doctor I’ve been curious of his backstory.  Now we have Engines of War by BBC Books and we have a snippet of a glimpse into what make this version of The Doctor tick. Unfortunately it seems this release might be a one shot which I hope it won’t be as The Time War and The War Doctor era is one that needs to be explored and expanded on.

I really enjoyed this book.  With the prospect of learning more about The War Doctor was really a great opportunity not to grab a hold of.  To learn more about the Time War and how this Doctor role in it was really explained perfectly as you can tell this is a Doctor with lot of regret and remorse.  But underneath it all he is still the same old Doctor who will fight to help everyone no matter the odds.  Even to the point of going up against the High Council and Rassilon himself.

What really drew me into Engines of War was all the stuff on Gallifrey and what The Doctor found out what Rassilon had in his tomb in the Death Zone.  The events of this book was really a set up for The Day of The Doctor and to see what the Daleks and then the Time Lords did to make The Doctor consider destroying Gallifrey and his own people is not really shocking but a culmination of what the war did to both races and it just made The Doctor sick of what his people had become.  The fact that he could not get his people to consider another plan that would not result in genocide was the final straw and having to fight both combatants to save the day ended up being costly and too much for The Doctor to take.  This part of the book was really good and gives you a better sense of why The Doctor used The Moment to destroy Gallifrey before they changed the timelines in Day of the Doctor.

This book was a fast read and really gripped my interest especially when it got to the Gallifrey part. Even though the Daleks are not in it as much as you would have thought they still had a presence and the weapon they developed will run chills down your spine.  Come to that what the Time Lords have developed will leave you a little freaked out.  I loved it.  What The Doctor was up against in this book was epic and it made for a fun read and was really intense and that is what I’m looking for in a Doctor Who book.

If you want to know more about The War Doctor then you should pick up Engines of War.  Even if you are looking for something different you should read this book as it is a really thrilling adventure. Hopefully the rumor that this is a one shot was not true and that they do come out with more stories for the War Doctor.
Grade A

Email ThisBlogThis!Share to TwitterShare to FacebookShare to Pinterest
Labels: doctor who, Engines of War, The War Doctor