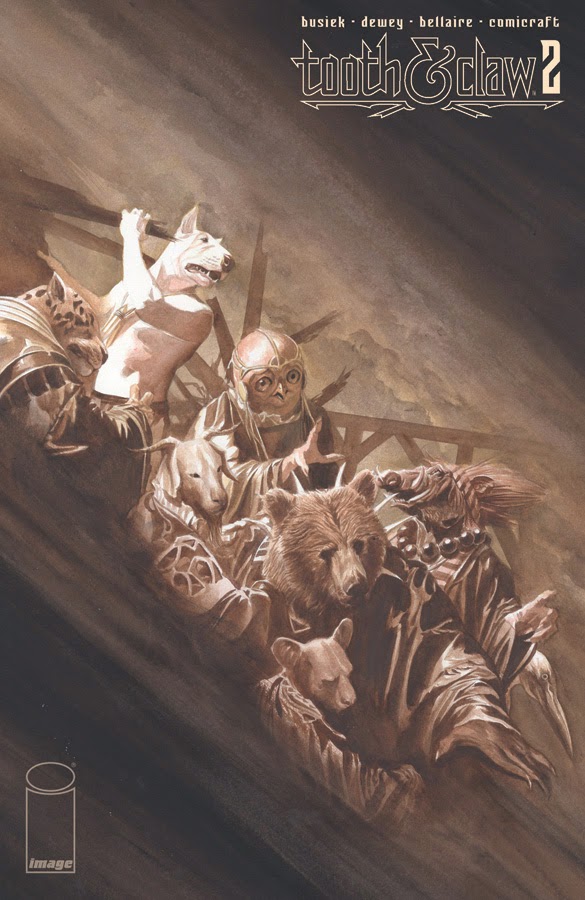 Ross’s creative process was immediately inspired by TOOTH & CLAW’s fantasy-feel when approaching his variant cover. "The world in TOOTH & CLAW is kind of a quasi-medieval fantasy, joined with classical designs,” said Ross. “That made me think of paintings lik e The Raft of the Medusa, and I wanted to capture that feeling, with the characters and situations from the series. Although really, the only reference I had was the Pogues album, Rum, Sodomy & The Lash, so in a way, that was my reference and my inspiration."

"It's an unusual subject for Alex,” added Busiek. “But he's painted such a wild range of stuff for Astro City that I was sure he'd do something amazing. So I showed him the art to the first issue, and he was glad to join in. And he really outdid himself, I'd say—it's a gorgeous, moody cover that really encapsulates what's going on in this world."

Ross was also influenced by Dewey’s caliber of artwork. "At this point, we all know what great work Kurt can do, but look at this awesome artwork by Ben Dewey!” said Ross. “This is some of the most impressive and elaborate illustration you can find in comics. How often do you see a world of animal protagonists in a comic story related with such realism and pathos? This book looks damn unique to me, and isn’t that what we should all be looking for?"