Doctor Who - Harvest of Time Review 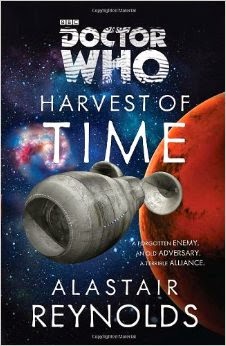 Doctor Who:
Harvest of Time
By Alastair Reynolds

The Third Doctor and Jo are embroiled in a pretty strange predicament.  It appears that The Master has called for aid from one of his future selves to help get him out of prison.  But unknown to The Master it did not work out the way he thought it would.   What The Doctor discovers is that something has gone wrong with The Masters timeline and that a future Master is not coming to save him but instead it appears he is being erased from time.  The Doctor has to keep reminding The Brigadier, Captain Yates and Sgt Benton about The Master by giving them a paper with his face on it to remind them who he is.  But that is not all.  The Sild have arrived on Earth and due to The Masters meddling with time used that signal to come to Earth and proceed to invade.  To save the Earth The Doctor must go to the future and with another unsettling alliance with The Master must find the source of the Sild and shut it down to save The Master and the Earth.

It took me a long time to read The Harvest of Time.  In fact it took me the better part of a year to finally get to the last page of this book.  But like the trooper that I am I trudged through it and finished it.  It wasn’t easy as I found myself distracted by reading other books and lots of comic books also.  Why was I distracted by other things instead of finishing this book right away?  Well because I found Harvest of Time to be boring.  It seemed to take a long time for it to get going and I had trouble staying interested.  One of the problems I had with the Pertwee era was that some of his stories were too long and seemed to be dragged and out and boring.  Like Ambassadors of Death and The Monster of Peladon come to mind that were pretty boring to watch.   This book reminded me of that type of story and that did not make me a happy reader.

There were some good points in Harvest in Time as we meet a future relative of Jamie McCrimmon in Edwina “Eddie” McCrimmon who was in charge of the oil rig that the Sild invaded.  She has a pretty big part to play in the book and is a pretty likeable character.  I thought it was pretty good to see one of Jamie’s descendants and to see the reaction of the Third Doctor seeing one of his companion’s relatives.  The ending was not bad and was pretty interesting and had that Pertwee era flair to it.  If there was a saving grace to this book it would be the way The Doctor and The Master solve the problem of the Sild.  The ending was pretty good but unfortunately it was a job to get there.  If you can get through three quarters of the book you will enjoy the ending.  I am glad that BBC books is releasing books with past Doctor’s in them and hope the do more of them but I do hope that it isn’t as boring as Harvest of Time.
Grade C-