Doctor Who - Into The Dalek Review By @WickedlyAce

Doctor Who:
Into the Dalek
Reviewed By Nyssa Ainley

A chance to see the actual biology of a DALEK…

The episode opens with a Star Wars Esque battle and music.  A soldier loses her brother to the Daleks and as she is almost hit she screams with white light blinding her.  Only for her to wake up on the TARDIS floor with the Doctor gazing down on her holding two cups of coffee.

“WHERE’S KAI?” she demands.  The Doctor berates her slightly for crying.  “My brother died!” she explains curtly.


“His sister didn’t I think he’d like that!” the Doctor replies as she mentions her name.  Journey Blue.  He guides her back to her ship Aristotle. “It’s smaller on the outside …” she says stunned.

“More exciting the other way round,” the Doctor replies drily.

After they go through the lab and talk Journey observes that the Doctor doesn’t like soldiers much.

“This is your patient!” says Journey’s Uncle. 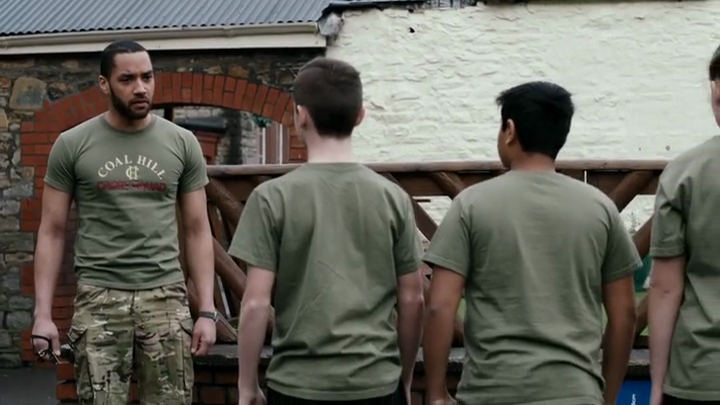 The scene cuts to a sexy man, a new addition to Coal Hill school. Clara spots him and smiles. In class a boy asks Mr Pink if he had ever killed a civilian.  A close up of a tear rolling down his cheek is rather poignant and I feel that this is important.

Clara puts her foot in it with Mr Pink but this does not stop her from asking him out.   Inner turmoil as we see Danny actually likes Clara.  I like how different this couple is to Amy and Rory.   This scene speaks volumes to me as I think it does to many people.

Clara clearly needs some supplies as she heads towards the stationery cupboard, where the Doctor is offering her the coffee.  The very same coffee he promised her three weeks ago!  Clara obviously got a train back ...

Clara follows him into the TARDIS as does a touching scene where we see the first sign of vulnerability as The Doctor needs needs an honest answer: “Tell me am I a good man?” to which Clara replies she doesn’t know.  Speaking for the audience where we are still not sure about 12 and his motives.

“No offence I have plans!” she says as she realises the Doctor is about to whisk her away.

“I need you!” the Doctor pleads.

Immediately she forgets about the plans and stands by the Doctor’s side. “Where are we going?” she asks eagerly.  “Into Darkness,” the Doctor replies.

Struggling with how to introduce Clara to the soldiers she jumps in with the word ‘carer!’  “My carer - she cares so I don’t have to!” putting a new twist on the reason why the Doctor needs a companion.

Anyone ever watched a film called Inner Space?  This is a trippier much darker version with a  sci fi twist.  Accompanied by haunting music that is so atmospheric.  Adding that extra piquant quality of surrealism that is this particular scene.

Now we are literally Into The Dalek and the story begins.

“Welcome to the most dangerous place in the universe!” the Doctor exclaims.

The chemistry between 12 and Clara is the best Doctor/Companion chemistry since Sylvester and Sophie.  We catch a little glimpse of this Doctor’s cheeky side.  It’s almost so good I want to see Capaldi bop Clara’s nose…

“Hello Rusty!” says the Doctor in what is suspiciously a Welsh accent.

Ross, a soldier who has accompanied the Doctor, Clara, Journey and Gretchen is surrounded by Dalek antibodies.  The Doctor gives him something to swallow an antibody zaps Ross to death.  Leading the others to believe the Doctor was saving him.  “He was a dead man anyway I was saving all of us!” the Doctor explains his motives leading into the mainstay of WHO which is: “FOLLOW ME and RUN!” when the Doctor says run you really feel like you are watching Doctor Who!

Down the shoot time! This will only end in .. Slime. which is confirmed by our hero as “People, the Daleks source of protein!”

“Yeah, top layer if you want to say a few words!” the Doctor says rather coldly.  Another reminder that the kind, sad lonely Doctor is now gone and we are definitely real old school Doctor - one who seems emotionally disconnected to the situation slightly.

“Rusty, what changed you?” the Doctor asked.

“The birth of a star!” the Dalek replies as he realises that resistance is futile.  Death only creates life.

We are now into the heart of a Dalek.  A suspiciously familiar looking crack glows from within.  The Doctor seals it with the Sonic Screwdriver.  Using it for what it is supposed to be used for again another sign that the show is going in a different direction.  Thus the Dalek is healed.

This is a good thing … right?  Yeah, a casual fan might think but us seasoned Whovians know better.

“Mulfunction is corrected!” the Dalek states. “EXTERMINATE!” he exclaims.

Well, what did you expect, Doctor?  i thought when he shook his head despondently repeating the word no.  “We had a Good Dalek and now it’s bad again?” Journey yells.  “There is no such thing as a Good Dalek…” the Doctor sighs.

Clara shows some spirit and SLAPS the Doctor’s face, confronting the Doctor on his view of the world: “Daleks are evil all is right with the world!” she says.  “THAT is NOT what we learned today!”

“Clara Oswald, do I really not pay you?”the Doctor says with a nuance of regret and emotion that is really more effective on second viewing. “Couldn’t afford me!” Clara replies softly.

“A good Dalek IS possible is that what we learned, Teach?” the Doctor say’s much later.

One of the other soldiers questions whether the Doctor is mad or right.  Her trust is put into the Doctor as she sacrifices herself.  Giving her full name as Gretchen Alison Carlisle she demands the Do ctor to do something good and name it after herself.  Mirroring the beginning a white light flashes as she screams … only to wake up in a quiet tea room.

“Welcome to Heaven!” the new mystery woman states.  “I am Missy, would you like some tea?”

I will leave it here … as the Doctor opens his soul to the Dalek with a bittersweet ending the Doctor and Rusty parts ways when Journey, Clara and the Doctor are out of the Dalek - presumably they pressed the button on the bracelets to say their mission was completed and got big again.

There was an interesting connection to DALEK where the DALEK in that story tells the Doctor that he would have made a ‘good DALEK’ AND Genesis of the Daleks where the Doctor there is given the power to destroy all the DALEK prototype but, eventually, doesn’t.  Obviously the Coal Hill School connection brings to mind Sophie Aldred’s first proper story, Remembrance.

All in all this story held a moral compass to both the Doctor and the Daleks as Steven Moffatt is definitely giving us a more challenging concept to deal with.

Daleks were based on Nazi’s with their ideals of purity through hatred.  Just as there where good Nazi’s as the second World War developed… why should not there be a Good Dalek?  An idea to certainly ponder on.

I love this story because of the moral dilemma it brings up .. it did not feel rushed towards the end and the music and plot was my sort of Doctor Who story.  12 is a non flirty Doctor and the minimal use of the Sonic Screwdriver is certainly refreshing.  Let us hope that continues.

I wonder who is the next person to go to Heaven is ...

Email ThisBlogThis!Share to TwitterShare to FacebookShare to Pinterest
Labels: 12th Doctor, doctor who, Into The Dalek, Peter Capaldi