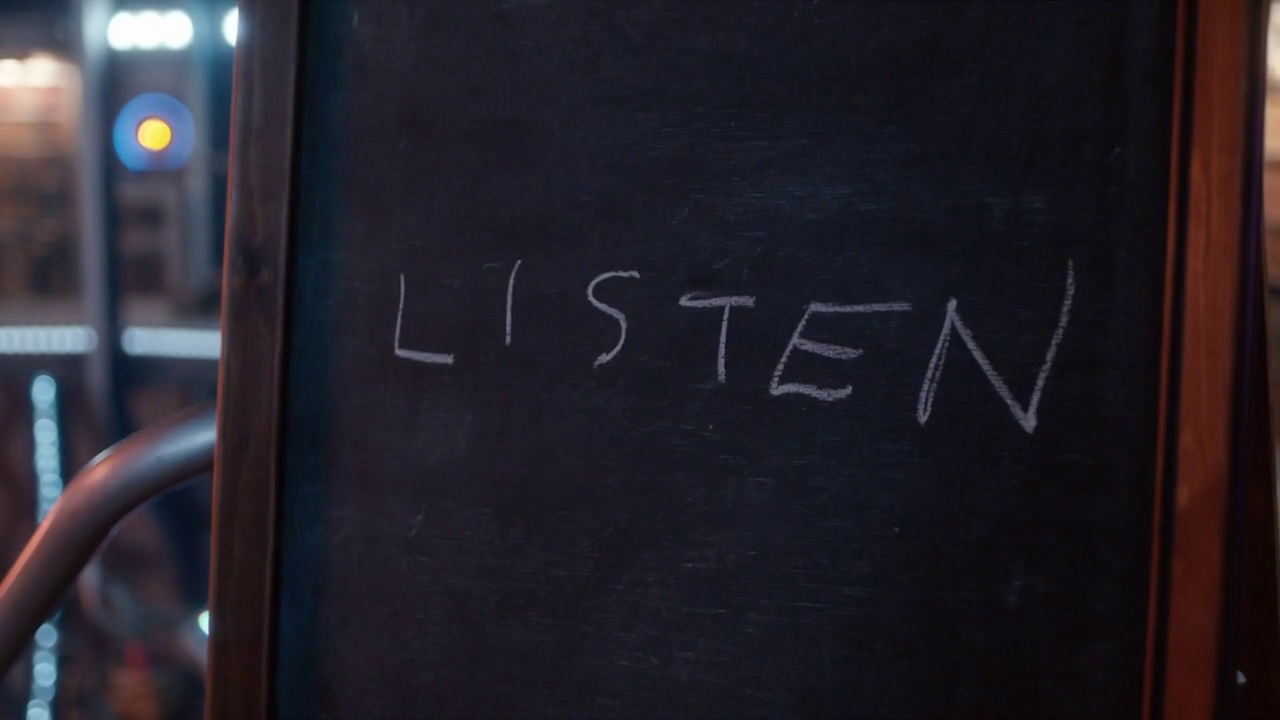 Doctor Who:
Listen
By Steven Moffat

“What’s that in the mirror, and the corner of your eye? What’s the footstep following, but never passing by?”

We all have had nightmares.  Waking up in the middle of the night in a fright and being scared for no apparent reason as our subconscious has a little fun at our own expense.  We have all been there. But what is the cause?  Is it an invisible creature under the bed waiting to get us? Those of us with kids have to deal with the inevitable nightmare in the middle of the night that wakes us in a startled state.  But what happens when a Time Lord has a nightmare?  What happens when he thinks he is not alone?  We found out after watching “Listen” or did we.

I have to say after seeing the trailer for “Listen” that I was really looking forward to watching this story.  I like the darker and scarier stories like “Midnight”, “Blink” and “Hide”.  I enjoyed when the Classic Series would be scary and send you behind the sofa.   Doctor Who is good for bringing the scares and should do so more often.  So I was delighted to see a story that was scary and intense in Series 8 of Doctor Who.   “Listen” did not disappoint.  It was scary and intense and a tad bit controversial if you believe what the fans on Twitter are saying.


Right from the beginning we are thrown in to it with The Doctor apparently talking to someone in the TARDIS but we cannot see the creature or person but we know it is there as there was a response to The Doctor’s question of what does it do and written on the chalk board was listen.  But we were also given some doubt about the creature as Clara said it looked like The Doctor’s handwriting.  I liked that as it kept me thinking if this was real or part of The Doctor’s subconscious playing tricks on him.

I really liked the scene with Clara and Rupert Pink.  We see Clara trying to comfort Rupert that there is nothing to be afraid of and that he was just having a nightmare.  She even went as far as going under his bed to prove there was nothing there.  What she did not count on was something being on top of his bed.  This scene was pretty scary and intense.  Made even scarier when the object was under the blanket and was staring at them and The Doctor was not sure if it was actually there or not or was a kid playing a trick on Rupert.  Clara is really developing into a pretty good character something they did not do much of in the last series.

We get to know Danny Pink a little bit better in “Listen”.  We find out he was the boy Rupert that they visited in the past and that he still kept a hold of the army guy into the future when we meet one of his future ancestors Orson who is the last man in the universe.  Danny’s character gets some development as we learn more about him with his date with Clara which does not go well.  This filler was fine as it did have some bearing on the story and is the distraction that sets The Doctor and Clara down his time stream.

Now for the big revelation which probably will cause some controversy with the fans.  We find out that Clara started the whole thing when the TARDIS went back to Gallifrey when The Doctor was a child.  It appears The Doctor sleeps in a barn and not with the other kids because he cries in his sleep and doesn’t want anyone to know.  Clara hides under the bed when she hears someone coming and realizes they did not go back into Danny’s past but The Doctor’s.  It was chilling to see that when the child Doctor get out of the bed and Clara grabs his leg and that look of terror in her eyes when it dawns on her that it was her fault for the nightmares.   She also calmed him down by talking to him and we get a glimpse that this is the same barn the War Doctor went to use The Moment.  It will be seen that Clara had more to do with the development of The Doctor at a younger age and that could be seen controversial with the fans especially the hardcore Classic fans but really isn’t as it would appear as a dream to him. Well that is my opinion anyway.

The thing is was there ever a creature at all in the story or was this all in The Doctor’s head all along? When Clara returns to the TARDIS and proclaims what if there was nothing but The Doctor being afraid of the dark.  Well was it? Was it all a wild goose chase? Which kind of leaves you thinking what did happen in this story and how could the thing on the bed in Rupert’s room be explained if this was just an investigation into The Doctor’s nightmare.  Plus all that stuff in Orson’s ship making the banging noises. Was there something outside or was it just The Doctor’s imagination getting the best of him?  “Listen” does pose a lot of questions and it leaves you deciding what happens.  Lots of room for speculation and I am sure social network will be discussing “Listen” for a while now and that the arguments will be plenty. 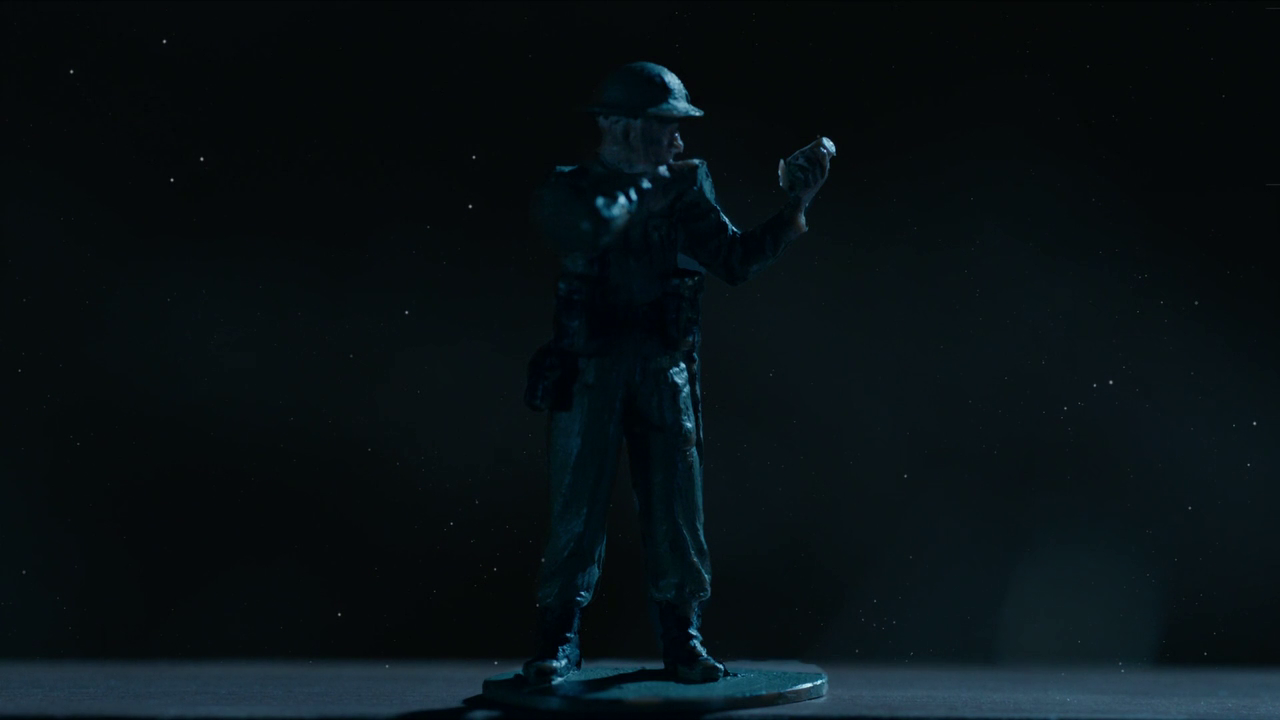 “Listen” is a scary story and that was a great thing with me.  It also raised a lot of questions and made my brain work overtime to come up with a solution that is plausible.  People are going to complain that there was not a monster but sometimes that is ok as you do not need a creature to scare you sometimes you just need basic things that happen in everyday life.   “Listen” gives us more insight into The Doctor’s early life and even though people will not like Clara’s involvement, it did work. At least for me it did.  The only problem that I did have with “Listen” is that Steven Moffat did not give us an ending that was not filled with endless speculation.  But hey he got what he wanted. He has the fans talking about it like crazy.
Grade B +
Posted by DR5WHO at 9:59 PM