My Return to Twin Peaks - The Series, Movie and Blu-ray 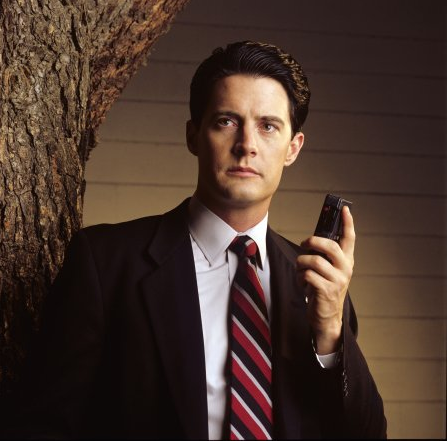 This was probably the 5th or 6th time watching the entire series from start to finish and obviously the first time in High Definition.  It is interesting to note that the TV series debuted as a quirky murder mystery with its appeal in the off beat characters, moody music and cinematography and the need to find out Who Killed Laura Palmer?  The series was very popular and was the talk of the town.  I, along with many people, enjoyed its originality and that David Lynch craziness that is a signature in most of his movies.  The series would no doubt keep people returning because of the murder mystery.  The multiple cliffhangers ending season 1 would bring back huge audiences in season 2 but then the inevitable dilemma surfaced for the writers – you reveal the killer and audiences drop or you drag out the reveal and audiences drop.

Probably the most fascinating thing for me personally with Twin Peaks is how I got hooked on this murder mystery in the first place.  I think the weirdness of it was what got me to watch it in the first place but liked it even more when it turned into a fantasy horror series.  With the start of the second season, Twin Peaks went into the realm of very strange and fantastical with entities that took over people, messages from the forest and the White and Black Lodges.  This was incredible for me and I loved the show even more once this became part of the series.  This would also allow Laura Palmer’s killer to be just about anyone and for the inhabiting being  to escape and cause havoc later on.  The series continued to amp up the strangeness and fantasy elements and it was all good for me.

Unfortunately the ratings dropped and perhaps the reason was rooted with this change toward horror fantasy but certainly one can see a massive shift once the killer is revealed and dealt with.  After the reveal for viewers, the ratings dropped off significantly and never came back even when the killer was revealed to the characters. Right off the bat you have so much going on in terms of characters leaving the series, and others with very little to do.  So many stupid plot lines were developed in season 2 to keep these characters occupied and most of them did not work.  The ideas were quirky and even funny at times and while they all seemed to make fun of daytime soap operas (something the show did well in season 1) the ideas were no longer good.

Still, there were plot lines that remained strong and toward the end of season 2 the show was rolling toward another incredible cliffhanger montage involving many characters on the brink of death.  Alas the series was not renewed and so many fans were devastated.  I always felt the show could have continued and felt that a showdown between good and evil, the people who were touched and the ones her were generally bad with the White and Black Lodges as the back drop but that was never to be.

The series deals with things that are not what they appear, duality of people and things and the good and evil that are part of this duality. Many characters seem to have a double life or double meaning. They all have secrets.  This is a great theme that constantly steered the show from start to finish and is part of what makes the show so interesting to discuss and analyse.

The prequel movie Twin Peaks Fire Walk With Me was a least something to appease fans and while my first feelings were that I could care less of the past, I wanted to know what happened after season 2, the movie was well crafted and so powerful.  Sure, the movie went way past crazy and into weird even for Lynch’s standard at the time – Black dog runs at night – really?  Stop that!!! 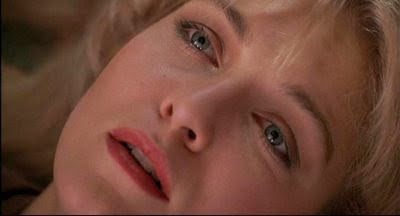 The movie is one of my favorite movies of all time as it retells the tale of Laura Palmer’s last days and her fighting off of the forces looking to take her over.  Thankfully the fantasy elements were in full force in the movie and while many other characters were left with little to do, it gave Sheryl Lee the limelight in an incredible performance.  I can certainly see why some fans disliked the movie because it had little sense of humor and quirkiness.  It was a sad tale of a teenage girl spiraling down the wrong path but in the end she heroically fights off the forces of evil that have been plaguing her for years and is redeemed in one of the happiest endings you can possibly imagine for a story or a girl being killed.

With the highlight of the movie leaving a good taste for me, the actual series holds up well for me and I enjoyed it perhaps more than the last time I visited it.  I was not as bored or annoyed with the bad plots, although Nicky the orphan and the civil war re-enactment are still low points. 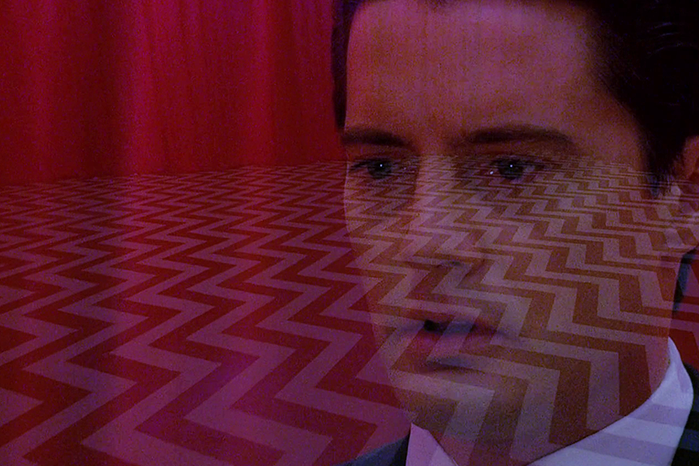 This Blu-ray set has lots of benefits and reasons why I purchased it day one. The HD presentation is beautiful.  Not much more can be said.  The set is absolutely packed full of extras, many of which were included in the DVD set but some new ones.  I highly recommend the set as it is just full of quality and content.  There have been audio sync problems for some people although in my case a change in one setting seemed to fix the problem.

One of the highlights for me on this set was the Missing Pieces which would consist of 90 minutes of deleted scenes from the movie Twin Peaks – Fire Walk With Me. I have been waiting for these scenes since the movie came out. 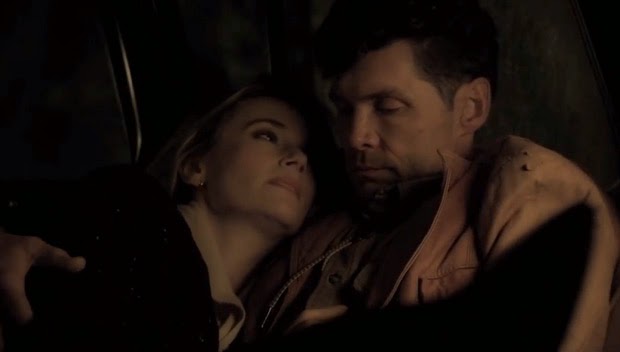 The deleted scenes, for the most part, are made up of some filler material just to give some of the many characters from the series a chance to at least appear in the movie.  They are really not part of the main story and while they might add some humor or character moments, one can see why they were cut.  Peggy Lipton’s Norma Jennings was one of the more notable cuts with a couple of great moments in the diner and later with Big Ed that really show a bit more of her sadness and love for Big Ed.  It is good to see these important characters at least make a fleeting appearance and in many cases the scenes are there to support some of the elements presented in the series including Laura’s call to Dr. Jacoby and Sheriff Truman’s sting operation for a drug bust are elements that we would see more of in the series. 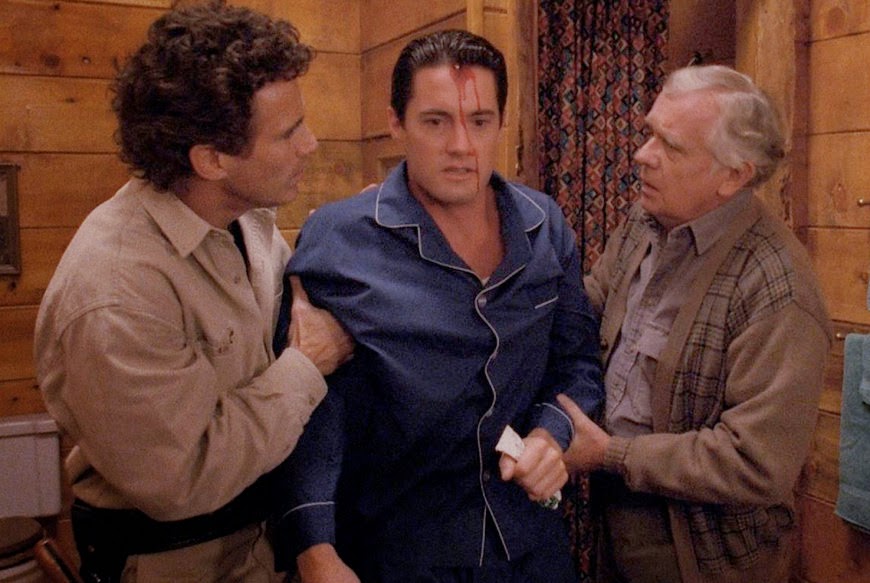 Still, there are some great deleted scenes that are either creepy or important to the story but none of which were necessary.  It was incredible to see some clips that were meant to take place after the happenings of the series, including Annie being taken to the hospital and the moments after Copper smashes his head against the hotel mirror.  Don’t expect any resolution or closure though.

Another highlight was David Lynch interviewing the characters Sarah, Laura and Leland Palmer.  The interview is as awkward as it sounds and a bit unsettling.  The interview with the actor and actresses is much better and informative.

The presentation of the set is beautiful and a lot of work was put into the restoration and remastering work.  There are loads of extras and easter eggs, some of which I have yet to view. 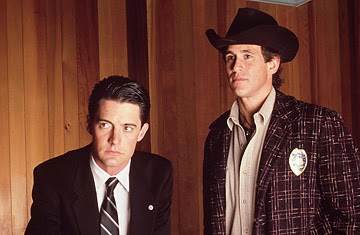 To say this is the ultimate release for Twin Peaks is a sure bet but there are a few things not included in the set that might upset some die-hards.  The Saturday Night Live skit is one of those extras that is included on the original DVD but not this set.  Also some fans have wished there was a longer cut of the movie instead of the deleted scenes presented separately.  It would have been neat to see this but it is not needed.  I also thought I had heard that the final episode of the series had lots more footage that was excised.  Whether that is true or not, who knows but I was hoping for more deleted scenes from the series.


If you are a fan, think about getting this set.  It is incredible.  If you have never seen the series, you may want to give it a shot, it is worth your time.