Doctor Who - The Loneliness of the Long - Distance Time Traveller Review 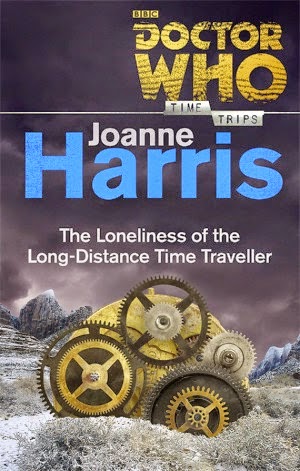 Doctor Who:
The Loneliness of the Long - Distance Time Traveller
By Joanne Harris
Reviewed By
Steve Taylor - Bryant

It's no secret that I have a lot of time for Joanne Harris. So when one of my favourite writers gets involved with Doctor Who it’s like two worlds have collided and once I get revived by very strong coffee (or Gin) I finally sit down and read Joanne's short story starring the third Doctor, The Loneliness of the Long-Distance Time Traveller.


The Doctor is alone, travelling the universe looking for his friend Sarah-Jane and dying from radiation picked up on Metebelis Three during a confrontation with the Spider-Queen. The TARDIS lands in a village, the cloister bell tolls and the Doctor awakes, being cared for by a lady known only as The Queen. This is no ordinary village. Anyone who shows anything other than happiness gets sucked up into the Gyre. The villagers have no names, they are just known as The Butcher, The Milkman and the like. There is a carnival everyday to celebrate the happiness but the Doctor discovers that the village is just reliving the same day over and over and causes enough of a ruckus to be taken to see who/what controls the Gyre. After being sucked up in a time vortex style event the Doctor awakes in a castle room confronted by a young girl who, it appears, could be the Princess living under a curse that The Queen had spoken of. The young girl mentioned that the day they were all reliving was April 8th, her birthday, and the village and parade were based on her memories of that day, a day she wished would never end. On that day the child, upset, had wished her daddy dead. The unfortunate event occurred due to the immense psychic power the Princess possessed and, in telling the Doctor, the Gyre finally calmed. The Doctor had restored balance to the universe and the Princess, Polly, was returned to the hospital bed in which she was dying, her mother, Alice, The Queen, at her bedside. Whilst the Doctor himself was dying from his radiation sickness he grants Polly her final wish of a story from the strange Time Travelling Man. The Doctor carries Polly into the TARDIS and asks that the TARDIS tell Polly her story. Polly puts her hand on the console and receives her adventure tale via a telepathic link with the TARDIS and after it was over Polly was filled with the happiness she had craved for so long.

Where do I start? This was a strange story for me to approach as I am not the biggest fan of the third Doctor. However, I was sucked in immediately. I have enjoyed the different versions of childhood fairy tales that have been written about or televised in recent years, and Joanne Harris has offered yet another unique spin on a childhood story by actually involving the child. I found the usually annoying Doctor to have a softer approach and whilst he was obviously suffering his own health issues, the time he spent with Polly and the way he treated the young child brought a tear to my eye, especially as a parent myself. Joanne Harris creates a visual world that I would love to see on screen but brings a dash of humanity to a character that can often come across as callous.  From My Little Pony type monster toys, to mentions of Faust, this is an incredible Doctor Who story that I truly believe could work with any incarnation of the Doctor. Are you listening Mr Moffat?
Grade A+
Posted by DR5WHO at 11:34 AM

Email ThisBlogThis!Share to TwitterShare to FacebookShare to Pinterest
Labels: doctor who, Joanne Harris