Doctor Who 50th Anniversary: Warriors of the Deep 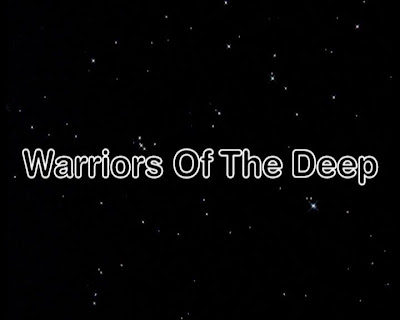 Doctor Who:
Warriors of the Deep
By Johnny Bryne

“There should have been another way.”

The TARDIS materializes in an underwater base after escaping being shot at it in orbit by a defense satellite Sentinel Six.  It appears to be the year 2084 and the super powers appear to be on the brink of war.  This event makes it a perfect time for a group of Silurians with their elite group of Sea Devil warriors to attack the sea base. 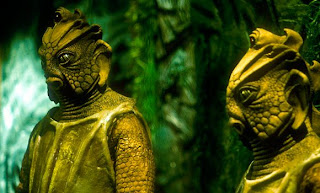 The Silurians plan on launching the missiles from the sea base and start a world war that would kill all the humans on the surface.  The thing about the missiles  is that they destroy all life but leave all the buildings which would make it ideal for the Silurians and Sea Devils to reoccupy the Earth.  The dilemma for The Doctor is that he wants to save both groups but the Silurians are making it really difficult with their actions for The Doctor to help them.  What makes matters worse is that an enemy faction is in the sea base also sabotaging it so it can’t fire its missiles making The Doctors job all that more difficult. 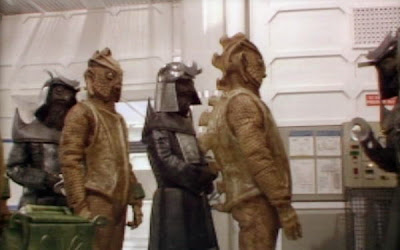 Warriors of the Deep is the first story of season 21 which is also the last season for Peter Davison.  Warriors of the Deep sees the long time return of the Silurians and Sea Devils which we haven’t seen since the Jon Pertwee era and this is the first time we see them together.   What should be a story and team up that should be great and wonderful turns out to be a disappointment.  While the previous stories that these old protagonist where in were more about trying to take over the Earth in a different way by virus. Well in Warriors of the Deep it is an all-out military attack on the base which is different from what we expect from them. 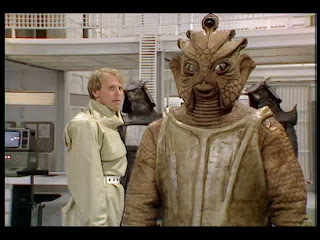 Warriors of the Deep is called by friends of mine Warriors of the Cheap as some of the sets just don’t cut it.  For one the bulk head door looks really bad as it is some type of plastic foam thing and the walls of the set shake really good and open at the seams in places. Plus the Myrka creature just doesn’t look all that good to begin with also.

Warriors of the Deep is a story that is actually not all that bad if you can get past some the questionable stuff they did in it.  Mainly if the Myrka was an electrified creature why would Doctor Solow try and take it on by doing karate.  What the hell was that.  I’m going to kick the creature with my foot and get electrocuted.  How dumb was that and I cannot believe that was in the script.  Truly one of the dumbest scenes in Doctor Who’s history. 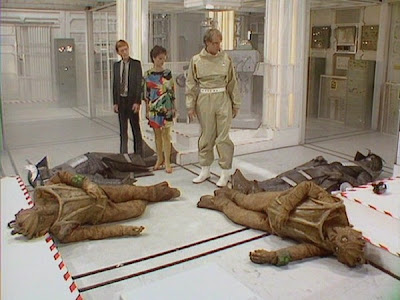 What gets me is that Warriors of the Deep could have been a better story as the plot wasn’t all that bad.  The situations was there for a good story but it is let down by a bad production.  This story does not age well at all as the 80’s style and fashion doesn’t help any.   For me Warriors of the Deep is a guilty pleasure as I find it fun watching The Doctor taking on the Silurians and Sea Devils and finding a way to stop the Myrka.  I also like the fight that has him falling into the water and we get to see The Doctor using his swimming abilities.  Not an overly good story but one that can be entertaining from time to time if to laugh at the 80’s fashion.
Grade C

Email ThisBlogThis!Share to TwitterShare to FacebookShare to Pinterest
Labels: 5th Doctor, doctor who, Doctor Who 50th Anniversary, Peter Davison, The Sea Devils, The Silurians, Warriors of the Deep